6) Citrate synthase is the enzyme that catalyzes the condensation of acetyl CoA and oxaloacetate to citrate. Which of the following is an activator of this enzyme?
a) Succinyl CoA
b) NADH
c) Fatty Acyl CoA
d) ADP 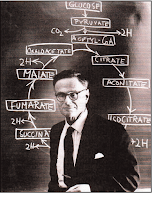