TOPAMAX (topiramate) For Treatment of Epilepsy: Indication, Side effect and Mechanism of Action

TOPAMAX (topiramate) is FDA Approved Drug For the Treatment of Epilepsy

TOPAMAX (topiramate) is indicated for:

Monotherapy epilepsy: Initial monotherapy in patients with & above 2 years of age with partial-onset or primary generalized tonic-clonic seizures

Migraine: Treatment for adults and adolescents 12 years of age and older for prophylaxis of migraine headache 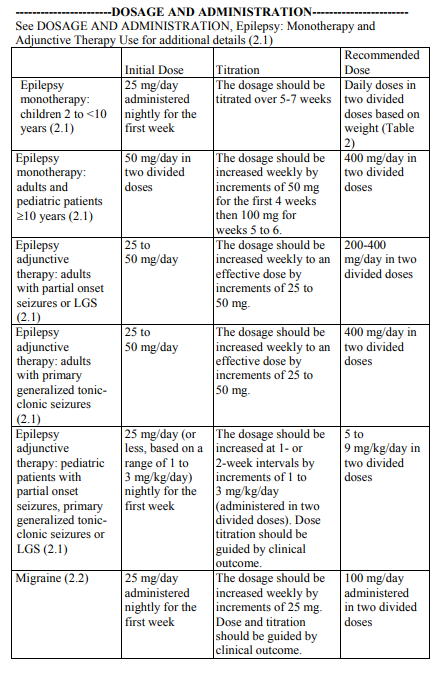 Visual field defects: These have been reported independent of elevated intraocular pressure. Consider discontinuation of TOPAMAX

Cognitive/neuropsychiatric: TOPAMAX may cause cognitive dysfunction. Patients should use caution when operating machinery including automobiles. Depression and mood problems may occur in epilepsy and migraine populations

Fetal Toxicity: TOPAMAX use during pregnancy can cause cleft lip and/or palate

Hyperammonemia and encephalopathy associated with or without concomitant valproic acid use: Patients with inborn errors of metabolism or reduced mitochondrial activity may have an increased risk of hyperammonemia. Measure ammonia if encephalopathic symptoms occur

Kidney stones: Use with other carbonic anhydrase inhibitors, other drugs causing metabolic acidosis, or in patients on a ketogenic diet should be avoided

Mechanism of Action of TOPAMAX

The precise mechanisms by which topiramate exerts its anticonvulsant and migraine prophylaxis effects are unknown; however, preclinical studies have revealed four properties that may contribute to topiramate's efficacy for epilepsy and migraine prophylaxis. Electrophysiological and biochemical evidence suggests that topiramate, at pharmacologically relevant concentrations, blocks voltage-dependent sodium channels, augments the activity of the neurotransmitter gamma-aminobutyrate at some subtypes of the GABA-A receptor, antagonizes the AMPA/kainate subtype of the glutamate receptor, and inhibits the carbonic anhydrase enzyme, particularly isozymes II and IV. 12.2

Topiramate has anticonvulsant activity in rat and mouse maximal electroshock seizure (MES) tests. Topiramate is only weakly effective in blocking clonic seizures induced by the GABAA receptor antagonist, pentylenetetrazole. Topiramate is also effective in rodent models of epilepsy, which include tonic and absence-like seizures in the spontaneous epileptic rat (SER) and tonic and clonic seizures induced in rats by kindling of the amygdala or by global ischemia. Changes (increases and decreases) from baseline in vital signs (systolic blood pressure-SBP, diastolic blood pressure-DBP, pulse) occurred more frequently in pediatric patients (6 to 17 years) treated with various daily doses of topiramate (50 mg, 100 mg, 200 mg, 2 to 3 mg/kg) than in patients treated with placebo in controlled trials for migraine prophylaxis. The most notable changes were SBP < 90 mm Hg, DBP < 50 mm Hg, SBP or DBP increases or decreases ≥ 20 mm Hg, and pulse increases or decreases ≥ 30 beats per minute. These changes were often dose-related, and were most frequently associated with the greatest treatment difference at the 200 mg dose level. When a position was specified for measurement of vital signs in a trial, measurements were made in a sitting position. Systematic collection of orthostatic vital signs has not been conducted. The clinical significance of these various changes in vital signs has not been clearly established.

The sprinkle formulation is bioequivalent to the immediate-release tablet formulation and, therefore, may be substituted as a therapeutic equivalent. Absorption of topiramate is rapid, with peak plasma concentrations occurring at approximately 2 hours following a 400 mg oral dose. The relative bioavailability of topiramate from the tablet formulation is about 80% compared to a solution. The bioavailability of topiramate is not affected by food. The pharmacokinetics of topiramate are linear with dose proportional increases in plasma concentration over the dose range studied (200 to 800 mg/day). The mean plasma elimination half-life is 21 hours after single or multiple doses. Steady-state is thus reached in about 4 days in patients with normal renal function. Topiramate is 15% to 41% bound to human plasma proteins over the blood concentration range of 0.5 to 250 µg/mL. The fraction bound decreased as blood concentration increased. Carbamazepine and phenytoin do not alter the binding of topiramate. Sodium valproate, at 500 µg/mL (a concentration 5 to 10 times higher than considered therapeutic for valproate) decreased the protein binding of topiramate from 23% to 13%. Topiramate does not influence the binding of sodium valproate.

Topiramate is not extensively metabolized and is primarily eliminated unchanged in the urine (approximately 70% of an administered dose). Six metabolites have been identified in humans, none of which constitutes more than 5% of an administered dose. The metabolites are formed via hydroxylation, hydrolysis, and glucuronidation. There is evidence of renal tubular reabsorption of topiramate. In rats, given probenecid to inhibit tubular reabsorption, along with topiramate, a significant increase in renal clearance of topiramate was observed. This interaction has not been evaluated in humans. Overall, oral plasma clearance (CL/F) is approximately 20 to 30 mL/min in adults following oral administration.