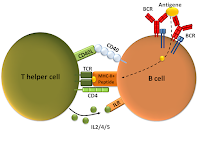 1) T cells (T lymphocytes) are crucial in the recognition of antigens presented by self-MHC. The T cell progenitors undergo proliferation and differentiation in the thymus and form a mature T cell.
Which of the following organ is the origin of T cell progenitors?
a) Thymus
b) Hepatocytes
c) Bone marrow
d) None of the above

2) What is the characteristic feature of progenitor T cells that have migrated to the thymus?
a) They express T cell receptor/CD3 complex
b) They express CD28 cell adhesion molecule
c) They express CD4 or CD8 co-receptor
d) None of the above

3) Which of the following cell adhesion molecule is present in the T cell progenitors required for homing these cells into the thymus?
a)CD25
b) CD44
c) IL-2
d) CTLA-4

5) Which of the following is the process for T cell development and maturation?
a) Rearrangement of T cell receptor and expression of coreceptors
b) Positive selection of thymocytes bearing receptors that are capable of binding to self-MHC molecules (MHC restriction)
c) Negative selection ensures the affinity receptor self MHC or MHC antigen complex is eliminated (self-tolerance)
d) All of the above

6) During the differentiation of T lymphocytes, the double-positive cells are directed to become CD4 + T cells & CD8+ T cells which are MHC II & MHC I restricted respectively.
Which of the following process might be the correct for T cell differentiation?
a) Intrinsic model- multiple interactions of MHC with double-positive (CD4+ & CD8+) instruct the cell to differentiate
b) Stochastic model- CD4 or CD8 expression in switched of randomly
c) Both A and B
d) None of the above

8) Which of the following cytoplasmic tail of CD4 or CD8 coreceptors are required for phosphorylation of ITAM present in CD3 molecules?
a) Lck
b) ZAP70
c) LAD
d) None of the above

10) Which of the cytokines function in an autocrine manner and induce T cell proliferation after engagement of TCR with antigens interaction and presence of secondary signal?
a) IL-1
b) IL-2
c) IL-3
d) IL-4

11) Cytokines such as IL-2, IFN-γ, and TNF-β, play an important role in cell-mediated cytotoxicity, and delayed hypersensitivity.
Which of the following subset of T helper cells are involved in the process?
a) T helper 1 CD4+
b) T helper 2 CD4+
c) T helper 1 CD8+
d) T helper 2 CD8+


14) The activated T cells undergo activation-induced cell death (AICD).
Which of the following is the effector molecule that is a response for AICD?
a) IL-2
b) Fas/Fas ligand
c) IL-4
d) INF-γ