on May 10, 2019
The renal system covers the glomerular function, tubular function, acid-base homeostasis,  biochemical assessment,  and clinical correlations. The glomerulus is mainly involved in the filtration of the blood for the excretion of waste products while retaining most of the proteins. The renal tubules function in secretion, reabsorption, and excretion of electrolytes, ions, organic acids, urea. The renal tubules help regulate osmolality, volume, and pH of the blood.

1) Urine is a fluid excreted by the kidney passed through ureters, stored in the bladder and discharged through the urethra. Which of the following is not the characteristics of urine?
a) pH 5.0 to 6.0
b) Specific gravity- approximately 1.024
c) Amber color
d) Turbid


3) Glucose is almost completely reabsorbed in the proximal tubules and no detectable amount of sugar is present in urine from healthy individuals. The renal threshold for glucose is
a) 100 mg/dl
b) 140 mg/dl
c) 180 mg/dl
d) 220 mg/dl

4) What is the site of reclamation of bicarbonate?
a) Glomerulus
b) Proximal Tubules
c) Loop of Henle
d) Distal Tubules

7) Approximately 90% of filtered calcium is reabsorbed in the nephron. Which of the following hormone increases absorption of calcium in an autocrine manner?
a) Parathyroid hormone
b) Antidiuretic hormone
c) Vit D3
d) Erythropoietin

8) The reabsorption of phosphate occurs via a secondary transport system. Which of the following ion is co-transported with phosphate ion?
a) Calcium
b) Magnesium
c) Potassium
d) Sodium

9) The urea is passively reabsorbed from the renal tubules along with sodium and water reabsorption.  The passive reabsorption is also facilitated by specific urea transports on
a) Proximal tubules
b) Loop of Henle
c) Distal Tubule
d) Collecting duct


11) Which of the following transporters is not the symporter that facilitates the transport of both molecule inside the membrane?
a) Na+/K+ transporter
b) Na+/Glucose transporter
c) Na+/Phosphate transporter
d) Na+/Amino acid transporter

15) About 80% of filtered bicarbonate is reabsorbed in proximal tubules. Which of the following enzymes or transporter is involved in the reabsorption of bicarbonate
a) Na+/K+ ATPase basolateral surface
b) Na+/H+ ATPase in the luminal surface
c) Carbonic anhydrase in tubules and proximal tubules
d) All of the above

16) Which of the following parts of the nephrons is important for the concentration of urine and have the highest osmolality?
a) Proximal tubules
b) Loop of Henle
c) Distal tubules
d) Collecting ducts

d) None of the above

20) Which of the following is not the function of late distal tubules and collecting ducts?
a) Reabsorption of sodium and water
b) Site of action of aldosterone
c) Site of ADH action
d) Reabsorption of hydrogen ions 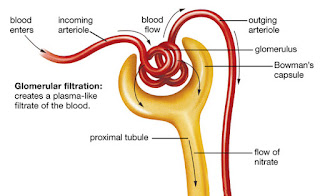