Metabolism and Disposal of Urea, Creatinine and Uric Acid: MCQ

Multiple Choice Question on Metabolism and Disposal of  Urea, Creatinine,

1) The urea molecule consists of two nitrogens and one carbon atom. The first nitrogen atom is derived from the free ammonium ion and the second from an amino acid. The amino acid that donates the  second amino group for the formation of urea is

2) The free ammonium group  (NH4+) is derived from the following processes:


4) Which of the following amino acid: keto acid pair bridge the urea cycle with the tricarboxylic acid cycle for the maintenance of nitrogen and amino acid pool

a) Glutamate: Alpha-ketoglutarate
b) Aspartate: Oxaloacetate
c) Alanine: Pyruvate
d) None of the above

5) Four Adenosine triphosphate equivalents are required for the formation of urea in the urea cycle. Which of the following enzymes utilize the ATPs

7) The deficiency of which of the following enzymes urea cycle results in impaired the synthesis of urea,  accumulation of ammonia (hyperammonemia), and orotic aciduria?

9) Which of the following compound is administered to the patients with urea cycle defect to remove the ammonia?

11) The creatine synthesis begins in the kidney and is completed liver and require three different amino acid for its formation.  The creatine undergoes phosphorylation to form creatine phosphate in various tissue. The following amino acids are required for its synthesis EXCEPT:

12) The interconversion of creatine and creatine phosphate is catalyzed by an enzyme creatine kinase. The creatine kinase has three different isoenzymes.  Which of the following isoenzyme is present in heart tissue that is elevated in myocardial infarction?

13) The interconversion of creatine and creatine phosphate is catalyzed by an enzyme creatine kinase. The creatine kinase has three different isoenzymes.  Which of the following isoenzyme is present in heart tissue that is elevated in skeletal muscle atrophy?

14) Creatinine is a compound formed by a spontaneous cyclization of creatine phosphate in the brain and muscles. The following statement is true for creatinine EXCEPT:

15) Creatinine clearance is used for

16) Uric acid is the excretory end product of purine metabolism. Which of the following condition lead to the increased production of uric acid

17) Which of the following amino acids have an important role in the transport of amino group from peripheral tissues to the liver?

18) The following metabolite is excreted via urine to maintain the nitrogen balance except:

19) In citrullinemia- a problem in the urea cycle, which of the following pathway is suppressed?

20) The Urea cycle is the most energy-efficient cycle. It requires ATP for the continuation of the cycle. Identify an intermediate that utilizes ATP for the formation.

21) Which of the following is the end product of purines metabolism in humans?


Multiple Choice Answers
1-b) Aspartate
2-d) All of the above
3- b) The presence N-acetyl glutamate inhibits the activity of CPS I enzyme
4- b) Aspartate: Oxaloacetate
5-a) Carbamoyl Phosphate synthase I &c) Argininosuccinate synthase
6- d) antiport that exchange citrulline with ornithine
7- b) Ornithine Transcarbamoylase
8- c) Argininosuccinate synthase
9- b) Phenylbutyrate
10- d) All of the above
11- a) Alanine
12- b) CK-MB
13- a) CK-MM
14- d) Creatinine is not secreted by kidney tubules 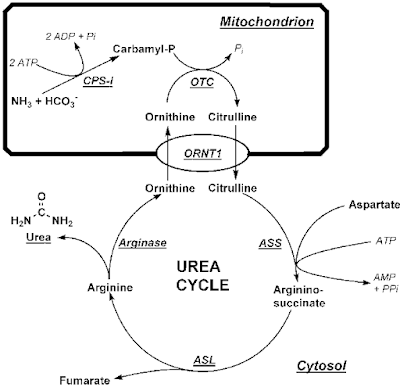