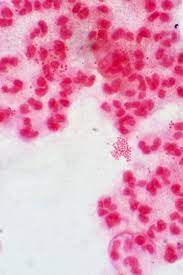 1). All of the following statements are the cultural characteristics of gram-negative diplococci, EXCEPT
a) Grow in aerobic as well as anaerobic conditions
b) They are oxidase-positive
c) Proper growth on media containing heated blood
d) Grow well in the presence of 20 to 25 % CO2

2) All of the following infections are the common clinical manifestations caused by N. gonorrhoeae, EXCEPT
a) Genital gonorrhea in women
b) Pelvic inflammatory disease in men
c) Neonatal conjunctivitis
d) Pharyngitis

3) N.gonorrhoeae consists of conjugate plasmids that make the bacteria resistant to which of the following antibiotics?
a)Tetracycline
b)Penicillins
c)Chloramphenicol
d) Ketoconazole

4) All, except one, are the examples of protein present in the antigenic structure of Neisseria gonorrhoeae that helps the bacteria to invade a host cell
a) Por proteins
b) Rmp proteins
c) Opa proteins
d) IgM protease

8) The meningococcal infections are predominant in which of the following age group?
a) Infants only
b) Children and Young adults
c) Adults only
d) Children and Adults

9) What is the one effective method of treatment for the primary stages of gonorrhoeal infections?
a) Vaccine
b) Use of condom
c) No treatment available
d) Antibiotics
10) Which of the following antigenic structure is considered the major virulence factor in the pathogenesis of Neisseria meningitidis?
a) Polysaccharide capsule
b) Pili
c) Porin
d) Opa protein

11) Which of the following component may not be required for the culture of blood specimens taken from the meningococcal infection patient?
a) Sodium sulfonate
b) Sodium gluconate
c) Sodium polyanethol sulfonate
d) Sodium polyascorbate

13) What is the drug of choice for the treatment of the meningococcal disease?
a) Penicillin
b) Amphotericin
c) Methicillin
d) Penicillin G

14) Which of the following route is not the common route for the transfer and spread of N.gonorrhoea?
a) Through kissing and hugging
b) Sexual intercourse
c) Infected mother to fetus
d) All of the above
15) Which of the following tests can be used to differentiate between Moraxella catarrhalis and saprophytic Neisseria spp from sputum specimens?
a) Oxidase
b) Butyrate esterase
c) Gram stain
d) Catalase
16) Vertical transmission of gonococcal infection to neonates can occur during the delivery through an infected mother.
What is the most common type of infection seen in newborns?
a) Meningitis
b) Liver infection
c) Mastitis
d) Ocular infection
17) N.gonorrhoeae infection of the genitourinary tract can develop into a pelvic inflammatory disease in women.
What are the most common life-threatening infections that may occur due to the infection?
Choose all the correct answers:
a) Infertility
b) Endometritis
c) Ectopic pregnancy
d) Meningitis
18) All of the following statement is true for meningococcal disease, except?
a) Vaccine is available for children above 10 for the prevention of the disease
b) Immunocompromised patient that have HIV, or people with sickle cell anemia are susceptible
c) Three serogroups of virus are most prevalent for the majority of the infection
d) It is a rare disease but can be severe and fatal if contracted