- Haemoglobin is a heme-containing protein
- Globular proteins with a diameter of 6.4 nm with a molecular weight of 64.5 kDa
- Heterodimers consisting of two α and two  β subunits
- Each subunit consist of a heme pocket that binds to the oxygen
- Heme is a tetrapyrrole ring structure consisting of  Fe+2 at the center
- The α subunit consist of 141 amino acids and the β subunit consists of 146 amino acids
- The hydrophobic interaction of the αβ dimers tightly held the quaternary structure of hemoglobin 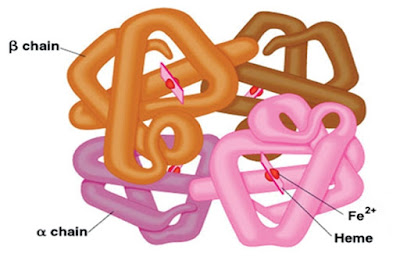 - One hemoglobin binds to four oxygen molecules and shows cooperativity
- Binding of one oxygen to a subunit induces the conformational change to convert T-state to R-state
-The R-state favors the binding of oxygen and facilitates the binding of oxygen to three other subunits.
-The T-state to R-state transition occurs when α1β1 and α2β2 dimers rotate 15-degree relative to its plane after oxygen binding to hemoglobin

Oxygen Saturation/Dissociation and Affinity of Hemoglobin: 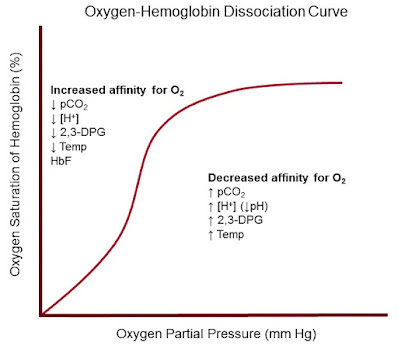 2-3 Bisphosphoglycerate (2,3-BPG)
- 2, 3 Bisphosphoglycerate is a glycolytic intermediate formed by the isomerization of 1,3 bisphosphoglycerate catalyzed by 2, 3 bisphosphoglycerate mutase in red blood cells.
-2, 3 Bisphosphoglycerate is present in an equimolar concentration (2 uM ) to hemoglobin
- A single 2,3-BPG binds to one hemoglobin at the center pocket present in the T-state hemoglobin (deoxygenated hemoglobin)
- 2,3-BPG decreases oxygen affinity of hemoglobin and shifts the oxygen saturation curve toward the right
- During T-R transition, the pocket collapse and the 2,3 BPG can no longer bind to hemoglobin
- In absence of 2,3-BPG, the purified hemoglobin has high affinity and a similar oxygen saturation curve to that of myoglobin
Hydrogen Ions & carbon dioxide (Bohr Effect)
-The regulation of oxygen binding by hydrogen ions or carbon dioxide is known as the Bohr effect
-Increased hydrogen ion (low pH) decreases the oxygen affinity of hemoglobin, enabling the release of oxygen in the peripheral tissues such as exercising muscle
-Increase in hydrogen ion cause the protonation of the β146 and forms the salt bridge with β94 to stabilize the T-state
-Carbon dioxide stabilizes deoxyhemoglobin by reacting with the N-terminal group to form carbamate groups, which are previously negatively charged and stabilized T-state
Types of Hemoglobin:
Based on the structure and subunit component, the hemoglobin can be classified as
Adult Hemoglobin (HbA): Major form of an adult form of hemoglobin consisting of α2β2 chains
Adult Hemoglobin Minor (HbA2): minor of an adult form of hemoglobin consisting of α2δ2
Fetal Hemoglobin (HbF): Fetal form of hemoglobin that is present in the fetus and consists of  α2γ2 chain. HbF does not bind to the 2.3-BPG and has a higher affinity for oxygen compared to HBA.
-This facilitates the transport of oxygen from the mother to the fetus
BIOCHEMISTRY haemoglobin deficiency Haemoglobin structure MULTIPLE CHOICE QUESTIONS