1) Which of the following is not the mosquito-borne viral disease?
a) Dengue
b) Lassa fever
c) Yellow fever
d) Japanese B encephalitis

2) Name the vector via which encephalitis and yellow fever are transmitted to humans?
a) Ticks
b) Sandflies
c) Mosquitoes
d) Rodents

3) All of the following statements are true regarding Arboviruses, Except?
a) All viruses of the family have a single-stranded RNA genome
b) They cause arthropod-borne viral infections
c) Viruses only belong to the family Arenaviridae
d) They can infect humans, animals, and plants

4) Japanese B encephalitis has been mainly found in Asia that can be transmitted through the bite of a mosquito, which of the following is the reservoir of the virus?
a) Herons
b) Horses
c) Cows
d) Rabbits

5) Name the Arbovirus that does not cause hemorrhagic fever in humans?
a) Lassa fever virus
b) Yellow fever virus
c) Hantavirus
d) Marburg and Ebola virus

6) The viruses belonging to the Bunyaviridae family can cause infections in humans and is transmitted via arthropods or rodents, select all the correct statements regarding the virus.
a) Encephalitis and hemorrhagic fever viruses belong to this family
b) Hantavirus belongs to the family
c) Yellow fever is the most common infection
d) The virus causing Rift valley fever is transmitted from animals to humans

7) Which of the following statement is true regarding the West Nile virus?
a) Humans get infected with the virus from the tick bite
b) The virus causes severe hemorrhagic fever
c) Belongs to the genus Flavivirus
d) The virus spreads from person to person

8) A 19 years old boy from Delhi, India suddenly developed a high fever with a headache, stomach ache, other symptoms included vomiting and diarrhea. When examined dengue fever was suspected, which of the following statement is not correct about the dengue virus?
a) Transmission is via ticks
b) Prevalent in tropical and subtropical regions of the world
c) More than one antigenic type of virus is present
d) Belongs to the family Flavivirus

10) Which of the following statement is True regarding the transmission of the virus causing Lassa fever?
a) It is transmitted to humans through the ticks
b) The virus is prevalent in Asian countries
c) Person to person transmission does not occur
d) The drug ribavirin has found to be effective against the virus

11) Yellow fever is caused by a flavivirus, the person infected develops jaundice with back pain and headache with fatal infections causing bleeding from the nose and mouth. Which of the following statement is not correct about yellow fever?
a) Mostly occur in the tropical and subtropical area of Africa and South America
b) Ticks are the major vector of the virus
c) Presented with necrotic lesions in the liver and kidney
d) An attenuated vaccine is available

12) All of the following statements regarding Hantavirus pulmonary syndrome are true, Except?
a) Can cause life-threatening respiratory infection
b) No vaccine or drug is available for the virus
c) The virus is only carried by deer mice
d) The virus can be transmitted by eating cow meat

13) Ebola virus causes hemorrhagic fever in humans and is often fatal, all of the following are the characteristics of the infection caused by the virus, Except?
a) Person to person transmission is possible
b) The vaccine is available for the virus
c) It is highly virulent in humans and nonhuman primates
d) The virus belongs to the family Flaviviridae

14) Japanese B encephalitis, dengue, and West Nile fever all belong to the genus Flavivirus?
a) True
b) False

15) Chikungunya virus infection has been spreading throughout America in recent years, the virus is transmitted to humans via mosquito bites. Which of the following are the major symptoms of this infection?
a) Severe leg and arm joints pain
b) Influenza-like symptoms
c) Yellowing of the skin
d) Bleeding from the nose
16) The mosquito-borne Zika virus outbreak was declared an epidemic mainly in which of the following regions?
a) Europe
b) China and India
c) Brazil and North America
d) South Africa and Ghana

Answers
1-b) Lassa fever
2-c) Mosquitoes
3-a) All viruses of the family have a single-stranded RNA genome
4-a) Herons
5)-
6-a), b) & d)
7-c) Belongs to the genus Flavivirus
8-a) Transmission is via ticks
9-d) None of the above
10-d) The drug ribavirin has found to be effective against the virus
11-b) Ticks are the major vector of the virus
12-d) The virus can be transmitted by eating cow meat
13-d) The virus belongs to the family Flaviviridae
14-a) True
15-a) Severe leg and arm joints pain
16- c)Brazil and North America 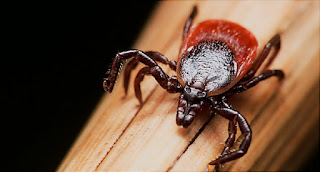