Acid-base treatment is a widely adopted dissociation method for improving the drug tolerance of the assay. The method is based on the principle that acid or base breaks any drug: antibody complex interaction thereby allowing the detection/capture reagents to the ADAs.
The method involves incubation of ADA: drug complex with weak acid with pH 2-3 (e.g 300mM acetic acid, 0.1 mM Glycine) followed by neutralization with base (1 mM Tris HCl, pH 9.5), whereas if a high concentration of circulating drugs is present, there is a higher probability that ADA re-associates with the drug during the neutralization step. The acid may also negatively affect the assay signal/noise ratio and assay sensitivity.
In those cases, an alternative sample extraction technique may be appropriate.

The solid-phase extraction and acid dissociation sample treatment method are performed in two steps:
a) A biotin-avidin capture technique physically separates ADA and ADA-drug complexes from the sample matrix, which eliminates the excess unbound drug and other serum proteins that can interfere in the assay.
b) The acid dissociation step removes the ADA from the biotin-avidin complex but does not dissociate the biotin-streptavidin bond. The high pH after neutralization encourages the binding of ADA and ADA: drug complex to the surface of a microtiter ELISA plate. The SPEAD treatment method has been shown to improve drug tolerance by 10-100 folds than without sample treatment while retaining the sensitivity of the assay. (Smith  et al. 2007)

The ACE method is based on the principle that acid treatment dissociates the ADA-drug complexes followed by neutralization in the solid-phase allowing ADA to be affinity captured. After washing excess drugs, ADA is diluted off with acid and subsequently bound to a fresh surface. Bound ADA are subsequently detected by the addition of biotinylated drug followed by streptavidin-HRP and substrate. (Bourdage et al., 2007). The ACE treatment method has been shown to improve drug tolerance up to 500 ug/ml while retaining the sensitivity of the assay below 500 ng/ml. (Click Here ACE Method in Details) 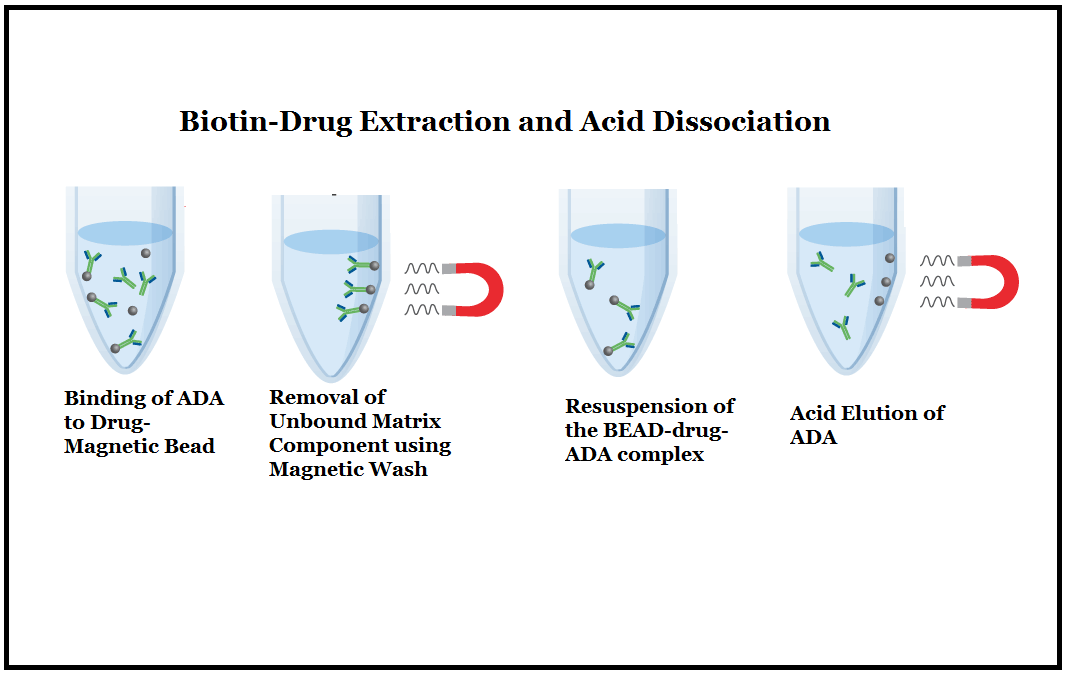 In the PandA method, the ADA:
Free drug complex formed in the presence of the excess free drug is precipitation using PEG. The precipitates are treated with an acid to dissociate the free drug-ADA complex. The dissociated free ADA is captured onto the large capacity surface and detected using a specific detection agent.
The assay with this treatment method was able to tolerate high drug concentration while retaining the sensitivity of the assay below 100 ng/ml. (Zoghbi et al, 2015)