on August 21, 2021
The circulating drug binds to the anti-drug antibodies (ADA) in the samples and interferes with the detection of ADA. The circulating drug severely reduces the sensitivity of the assay and increases the false-negative rate during clinical bioanalyis. Drugs can interfere with ADA detection by two mechanisms.
a) Circulating drugs form immune complexes with ADA
b) Circulating drugs compete with the detection reagents in the assay
Biotin-Drug Extraction and Acid Dissociation (BEAD) reduces the circulating drugs from the sample
BEAD method has shown to effectively remove the circulating drugs from the serum samples and reduce the drug interference in the assay. The BEAD method utilizes acetic acid to dissociate the drug-ADA complex. The sample is rapidly neutralized in the Tris-HCl containing an excess of biotinylated drug and allow binding to ADA to biotinylated drugs. The streptavidin-coated magnetic Bead is used to capture the biotinylated drug-ADA complex and remove any free circulating drugs. The second acid dissociation step is used to elute the ADA bound to biotinylated drugs. This procedure is widely in ADA assays to reduce drug interference and improve assay sensitivity.
1.0 Stepwise Protocol for optimization of BEAD method
a) Optimize the strength of acetic acid and neutralizing reagents: The first step for optimizing the BEAD method is to find the optimal strength acetic acid sufficient to dissociate the drug: ADA complex. The strength and the ratio of the acetic acid depend on the affinity of ADA: drug complex. The optimal proportion of samples to acetic acid ranges from 1:5 to 1:10 ratio.
-Use 100-600 mM acetic acid for disruption of the drug: ADA complexes.
-Use multiple surrogate positive control antibodies with different binding affinities to optimize the strength of the acetic acid required to disrupt the ADA: drug complexes.
- Titrate the 1 mM Tris HCL to determine the volume sufficient to neutralize the acid and bring the pH of the solution to approximately 7.4.
b) Optimize Biotinylated Drug Concentration: The biotinylated drug is used to capture and saturate the unbound form of ADA resulted from acid dissociation. Acid dissociation and rapid neutralization with biotinylated drugs(in Tris HCl) enable the efficient capture of ADA to biotinylated drugs and prevent the re-association of ADA with the circulating drugs.
- The optimal concentration of the biotinylated drug depends on the concentration of circulating drugs present in clinical samples (Cmax-maximal drug concentration observed in the clinical sample) and target drug tolerance.
- Test various concentrations of biotinylated drugs (approximately 10-100 times higher than Cmax) prepared in neutralizing buffer (1 M Tris HCl) to find the optimal concentration that yields higher ADA recovery & reduce drug interference.
Note: higher concentration of biotinylated drugs requires a larger volume of magnetic beads.
c) Streptavidin-coated Magnetic Beads: The streptavidin-coated magnetic beads are used to selective binding the biotin:drug-ADA complex from a mixture of biotin-drugs-ADA and free drugs present in the sample. The concentration/volume of magnetic beads depends on the binding capacity of the bead, the concentration of biotinylated drugs used in the assay, etc.
-GE healthcare- Sera-Mag Bead with higher binding capacity and low sedimentation rate (microparticles) are most widely used for these types of extraction
-Test 25 to100 microliter of magnetic beads to determine the minimum amount of beads required to capture the majority of the biotin-drug-ADA complex.
d) Bead Washing and removal of the free drug: Use plate washer with the magnet base for washing beads and remove any free circulating drugs. The washing step is crucial and requires precaution to prevent the aspiration of any magnetic beads.
e) Elution of ADA:
In this step, the ADA is eluted from the biotin-drug bound to the magnetic beads.
-Use 100-600 mM acetic acid to dissociate the ADA from biotinylated drug bound to magnetic beads.
-Test different strengths and volumes of acetic acid to completely elute the ADA. Using higher volume can substantially dilute the ADA.
- Use  96-well magnetic plate to sediment the magnetic beads and aspirate the ADA solution
-Neutralize with 1 M Tris HCl and assay diluent and the samples are ready for running in ADA assays.
2.0 Critical Assessment Parameters
a) Assess ADA Recovery- >80% recovery of ADA are expected
-Use a known (low and high) concentration of surrogate positive control  prepared buffers to determine the percent recovery and efficiency of the BEAD method
The simplest approach to determine the percent recovery from the assay signals is
% Recovery =
{Assay signal(without BEAD treatment)-Assay Signal (BEAD treatment)}/ {Assay signal(without BEAD treatment)
b) Assess the efficiency of drug removal: >80% drug removal efficiency are expected
-Use a known (low and high) concentration of surrogate positive control spiked with increasing concentration of drugs (samples prepared buffers)
-Determine % Recovery of surrogate positive at each concentration of drug
-Determine the residual drug concentration in the final eluate
c) Validate the %recovery and drug removal efficiency in the sample matrix
d) Use clinical sample pool to confirm the drug interference in clinical samples
References
Jiang et al. 2014
Xu et al. 2015,
Niu H et al. 2017 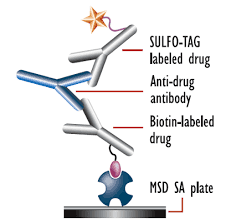