on January 10, 2022
A 54- year old female was brought to the Emergency Department with complaints of sweating, palpitations, and dizziness. Her random blood glucose is 25 mg/dl. After the infusion of glucose, the symptoms were relieved. Upon clinical chemistry analysis, her plasma insulin level was higher with a low level of C-peptide.
What is the diagnosis for this patient?

Provisional Diagnosis: Hypoglycemia, due to hyperinsulinemia


Answer and Explanation:
First, the case presentation suggests that the female subject may have been suffering from hypoglycemia based on a classical feature of Whipple Triad which includes:
a) the decreased blood glucose level below normal reference level ( 60-110 mg/dL),
b) the subject is also presented with classical symptoms of hypoglycemia such as sweating, palpitation, and dizziness.
c) the symptoms were immediately relieved with the infusion of glucose.

Second, the blood chemistry analysis revealed the insulin level in the subject was higher. The higher blood insulin level is responsible for decreased blood glucose. Insulin is a 51 amino-acid peptide hormone produced by islet beta cells of the pancreas and has a critical role in maintaining normal blood glucose levels (60-110 mg/dL). In healthy individuals, the rise in postprandial blood glucose ( spike of blood glucose after a meal) results in an increased flux of glucose into islet beta cells of the pancreas. The islet beta-cell expresses GLUT2 glucose transporter have high Vmax and high Km that enable efficient transport of glucose into beta cells when the blood glucose level rise above its normal physiological level. The intracellular glucose is now rapidly phosphorylated to form glucose-6-phosphate by an enzyme glucokinase and subsequently, enters the glycolytic pathway to generate ATP. In response to the high ATP/ADP ratio, the ATP-sensitive potassium channel is closed, resulting in depolarization and influx of calcium into cells, resulting in a release of insulin granules into the blood. The insulin binds to the insulin receptor multiple target tissues including the liver and muscles. Insulin decreases blood glucose level up-regulating glucose intake, glycogen synthesis, and conversion into triglycerides and storage. Insulin also downregulates glycogen breakdown, gluconeogenesis, and the release of glucose into the blood. When insulin level is higher than normal physiological level, the equilibrium shift towards increased storage and decrease utilizing of glucose resulting in hypoglycemia. 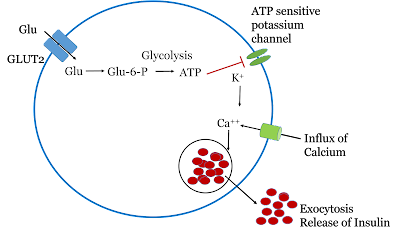 Figure 2: Structure of Insulin consisting of two chains connected by disulfide bonds. C-peptide is cleaved during post-translation modification resulting in an equimolar concentration of insulin and C-peptide in insulin-secreting granules of beta cells. The A chain and B chain consist of 21 and 30 amino acids respectively.

Finally, hypoglycemia is the effect of hyperinsulinemia and insulinemia may be associated with tumors associated with hyper-insulin secretion or exogenous infusion of insulin in cases of insulin-requiring diabetes. The measurement of C-peptide enables the differentiation of endogenous or infused insulin. C-peptide is a C-terminal part of proinsulin that is cleaved off during post-translational modification and maturation of active insulin. C-peptide is present in an equimolar concentration in the insulin granules and they are co-secreted with insulin from the beta cell of the pancreas. The C-peptide has a longer half-life than insulin and therefore it is a sensitive biomarker to monitor the function of the beta cell of the pancreas. The disproportionate levels of insulin and C-peptide suggest that the most likely cause of hypoglycemia is associated with an insulin overdose. In the case of a tumor of the beta cell, a proportionate increase in insulin and C-peptide is anticipated.