on November 11, 2020
ZOLGENSMA® (onasemnogene abeparvovec-xioi) Suspension for intravenous infusion
ZOLGENSMA is a suspension of an adeno-associated viral vector-based gene therapy for intravenous infusion. It is a recombinant self-complementary AAV9 containing a transgene encoding the human survival motor neuron (SMN) protein, under the control of a cytomegalovirus enhancer/chicken-β-actin hybrid promoter. ZOLGENSMA has a nominal concentration of 2.0 × 1013 vg/mL.
CLINICAL PHARMACOLOGY
Mechanism of Action:
ZOLGENSMA is a recombinant AAV9-based gene therapy designed to deliver a copy of the gene encoding the human SMN protein. SMA is caused by a bi-allelic mutation in the SMN1 gene, which results in insufficient SMN protein expression. Intravenous administration of ZOLGENSMA that results in cell transduction and expression of the SMN protein has been observed in two human case studies.
Pharmacokinetics
Vector shedding after infusion with ZOLGENSMA was investigated at multiple time points during the completed clinical trial. Samples of saliva, urine and stool were collected the day after infusion, weekly through Day 30, and then monthly through Month 12 and every 3 months thereafter. Samples from 5 patients were used for ZOLGENSMA vector DNA shedding analysis through the Month 18 visit. 9 Vector DNA was shed in saliva, urine and stool after infusion of ZOLGENSMA, with much higher concentrations of vector DNA found in stool than in saliva or urine. The vector DNA concentration in saliva was low on Day 1 after infusion and declined to undetectable levels within 3 weeks. In urine, the vector DNA concentration was very low on Day 1 after infusion and declined to undetectable levels within 1 to 2 weeks. In stool, the vector DNA concentration was much higher than in saliva or urine for 1 to 2 weeks after infusion and declined to undetectable levels by 1 to 2 months after infusion.
Biodistribution was evaluated in two patients who died 5.7 months and 1.7 months, respectively, after infusion of ZOLGENSMA at the dose of 1.1 x 1014 vg/kg. Both cases showed that the highest levels of vector DNA were found in the liver. Vector DNA was also detected in the spleen, heart, pancreas, inguinal lymph node, skeletal muscles, peripheral nerves, kidney, lung, intestines, spinal cord, brain, and thymus. Immunostaining for SMN protein showed generalized SMN expression in spinal motor neurons, neuronal and glial cells of the brain, and in the heart, liver, skeletal muscles, and other tissues evaluated.
Initial U.S. Approval: 2019
INDICATIONS AND USAGE
ZOLGENSMA (onasemnogene abeparvovec-xioi) is an adeno-associated virus vector-based gene therapy indicated for the treatment of pediatric patients less than 2 years of age with spinal muscular atrophy (SMA) with bi-allelic mutations in the survival motor neuron 1 (SMN1) gene. (1)
Limitation of Use:
The safety and effectiveness of repeat administration of ZOLGENSMA have not been evaluated.
The use of ZOLGENSMA in patients with advanced SMA (e.g., complete paralysis of limbs, permanent ventilator dependence) has not been evaluated.

DOSAGE AND ADMINISTRATION
ZOLGENSMA is for single-dose intravenous infusion only. The recommended dosage of ZOLGENSMA is 1.1 × 1014 vector genomes (vg) per kg of body weight.
Administer ZOLGENSMA as an intravenous infusion over 60 minutes.
Starting one day prior to ZOLGENSMA infusion, administer systemic corticosteroids equivalent to oral prednisolone at 1 mg/kg of body weight per day for a total of 30 days. At the end of the 30­-day period of systemic corticosteroid treatment, check liver function by clinical examination and by laboratory testing. For patients with unremarkable findings, taper the corticosteroid dose over the next 28 days. If liver function abnormalities persist, continue systemic corticosteroids (equivalent to oral prednisolone at 1 mg/kg/day) until findings become unremarkable, and then taper the corticosteroid dose over the next 28 days. Consult expert(s) if patients do not respond adequately to the equivalent of 1 mg/kg/day oral prednisolone.
DOSAGE FORMS AND STRENGTHS
ZOLGENSMA is a suspension for intravenous infusion, supplied as single-use vials. ZOLGENSMA is provided in a kit containing 2 to 9 vials, as a combination of 2 vial fill volumes (either 5.5 mL or 8.3 mL). All vials have a nominal concentration of 2.0 × 1013 vector genomes (vg) per mL. Each vial of ZOLGENSMA contains an extractable volume of not less than either 5.5 mL or 8.3 mL.
CONTRAINDICATIONS
None
WARNINGS AND PRECAUTIONS
Thrombocytopenia: Monitor platelet counts before ZOLGENSMA infusion, and weekly for the first month and then every other week for the second and third month until platelet counts return to baseline.
Elevated Troponin-I: Monitor troponin-I before ZOLGENSMA infusion, and weekly for the first month and then monthly for the second and third month until troponin-I level returns to baseline.
ADVERSE REACTIONS
The most common adverse reactions (incidence ≥ 5%) were elevated aminotransferases and vomiting.
IMMUNOGENICITY
In ZOLGENSMA clinical trials, patients were required to have baseline anti-AAV9 antibody titers of ≤ 1:50, measured using an enzyme-linked immunosorbent assay (ELISA). Evidence of prior exposure to AAV9 was uncommon. The safety and efficacy of ZOLGENSMA in patients with anti-AAV9 antibody titers above 1:50 have not been evaluated. Perform baseline testing for the presence of anti-AAV9 antibodies prior to the ZOLGENSMA infusion. Retesting may be performed if anti-AAV9 antibody titers are reported as > 1:50
USE IN SPECIFIC POPULATIONS
Pediatric use: Use of ZOLGENSMA in premature neonates before reaching full-term gestational age is not recommended because concomitant treatment with corticosteroids may adversely affect neurological development. Delay ZOLGENSMA infusion until full-term gestational age is reached.
Reference: FDA Package Insert 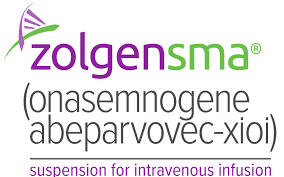