on November 23, 2020
The cut-point of the assay is the level of response of the assay that defines the sample response as positive or negative. Establishing the appropriate cut-point is critical to minimizing the risk of false-negative results. The screening cut points are determined by assaying a set of approximately 50 drug-naive individual serum samples over three days by two analysts for a total of six runs. Here, we describe the stepwise procedure to calculate the statistical cut point using the parametric and robust parametric method.
Steps for estimating Screening cut points
1) Compile the data from 50 drug-naive individuals assayed by two analysts over 3 days for a total of six days. (See template below)
2) Compute the log transformation of the assay signal and NC-normalized values for the data sets. Shankar et al 2008 recommend stepwise evaluation of non transformed and transformed data for establishing cut points. Based on our experience, the NC-normalized data are mostly suitable for establishing the cut point because these data sets are less susceptible to plate-to-plate and day-to-day variability.
3) Use the box plot analysis in JMP to identify and exclude outliers.
4) Use the Shapiro-Wilk Test for the test of homogeneity or normality. The data is normally distributed when the p-value for the Shapiro-Wilk Test is less than 0.05. Use the nonparametric method for the data that are not normally distributed.
5) Perform ANOVA analysis (Oneway ANOVA in JMP software)  to compare the mean and variances among six runs.
6) Use the Levene test and F test for comparing means and variances among six runs. The means and variance were considered when P<0.05.
7) Use the Parametric method for the data sets
-when means and variances are equal variances or
-when the variances are equal but means are different.
The formula for parametric cut point with a 5% false-positive rate
Screening Cut Point = Mean (Normalized) + 1.65 X Standard Deviation
8) Evaluate the cut point using Robust Parametric Method for the data sets with different means and variances or high outliers
Screening Cut Point = Median (Normalized) + 1.65 X (1.45 X Median Absolute Deviation)
Template for Data Complilation 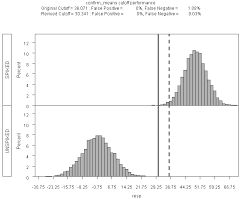