- Valoctocogene Roxaparvovec is an investigational gene therapy treatment for Hemophilia A developed by Biomarin
- FDA issued the complete response letter requesting two years of durability data from the phase 3 study
- EMA: Biomarin withdrew MMA application marketing authorization
- Biomarin is awaiting one-year of Phase 3data for EMA resubmission and two years of Phase 3 data for FDA submission
- If approved, it will become first-in-class gene therapy for the treatment of Severe Hemophilia A

Valoctocogene Roxaparvovec is an investigational gene therapy product for the treatment of Hemophilia A. It is a Adeno-Associated Virus Vector-Mediated Gene Transfer of Human Factor VIII in Hemophilia A. The gene construct consists of the B-domain depleted VIII under liver-specific promoter to drive expression in the liver.
Efficacy:
Efficacy was observed with a significant reduction of annualized bleeding rate and usage of factor VIII infusion in phase 2 and phase 3 at the vector dose 6e13 vg/kg.
Durability:
There is a concern of durability of the factor VIII expression as an evident gradual decrease in Factor VIII activity after four years of treatment. In the phase 3 study, the lower factor VIII activity was observed at 23-26 weeks, the time point at which the VIII activity peaked on subjects from the Phase 2 study.
Regulatory Status
FDA/BLA
FDA issued a complete response letter to Biomarin and requested to resubmit the application with two years durability of VIII expression and reduction of annualized bleeding rate.
The Agency recommended that the Company complete the Phase 3 Study and submit two-year follow-up safety and efficacy data on all study participants. FDA concluded that the differences between Study 270-201 (Phase 1/2) and the Phase 3 study limited its ability to rely on the Phase 1/2 study to support the durability of effect. The Phase 3 study was fully enrolled in November 2019, and the last patient will complete two years of follow up in November 2021.
EMA
Biomarin withdrew MMA application marketing authorization. it was not able to provide the requested data during the current procedure

Updated on As of the April 30, 2019 data cutoff, between weeks 23 to 26, in a cohort of the Phase 3 GENEr8-1 study of valoctocogene roxaparvovec dosed at 6e13 vg/kg, seven of 16 study participants reached or exceeded the pre-specified Factor VIII levels of 40 international units per deciliter using the chromogenic substrate (CS) assay. Subsequent to the April 30 cutoff, one additional participant met that criteria, bringing the total to eight participants.

For the 16 patients who had reached week 26 by the April 30 cutoff since the administration of valoctocogene roxaparvovec, the estimated median Annual Bleed Rate (ABR) was zero and the estimated mean ABR was 1.5, representing a reduction of 85% from baseline levels where all patients were on the standard of care prophylaxis. In addition, there was an 84% reduction in median annualized Factor VIII usage and a 94% reduction in mean FVIII usage annualized between week 5 and 26.
In the 23 to 26 week time period the mean Factor VIII level using the CS assay was 36 (SD=28) IU/dL and the median was 33 IU/dL.

Reduction in Annualized Bleeding Rate
Reduction of Usage of Factor VIII Infusion to stop bleeding
In the six study participants who were previously on Factor VIII prophylaxis in the 6e13 vg/kg cohort, the data showed substantial and sustained reductions in bleeding that required Factor VIII infusions. 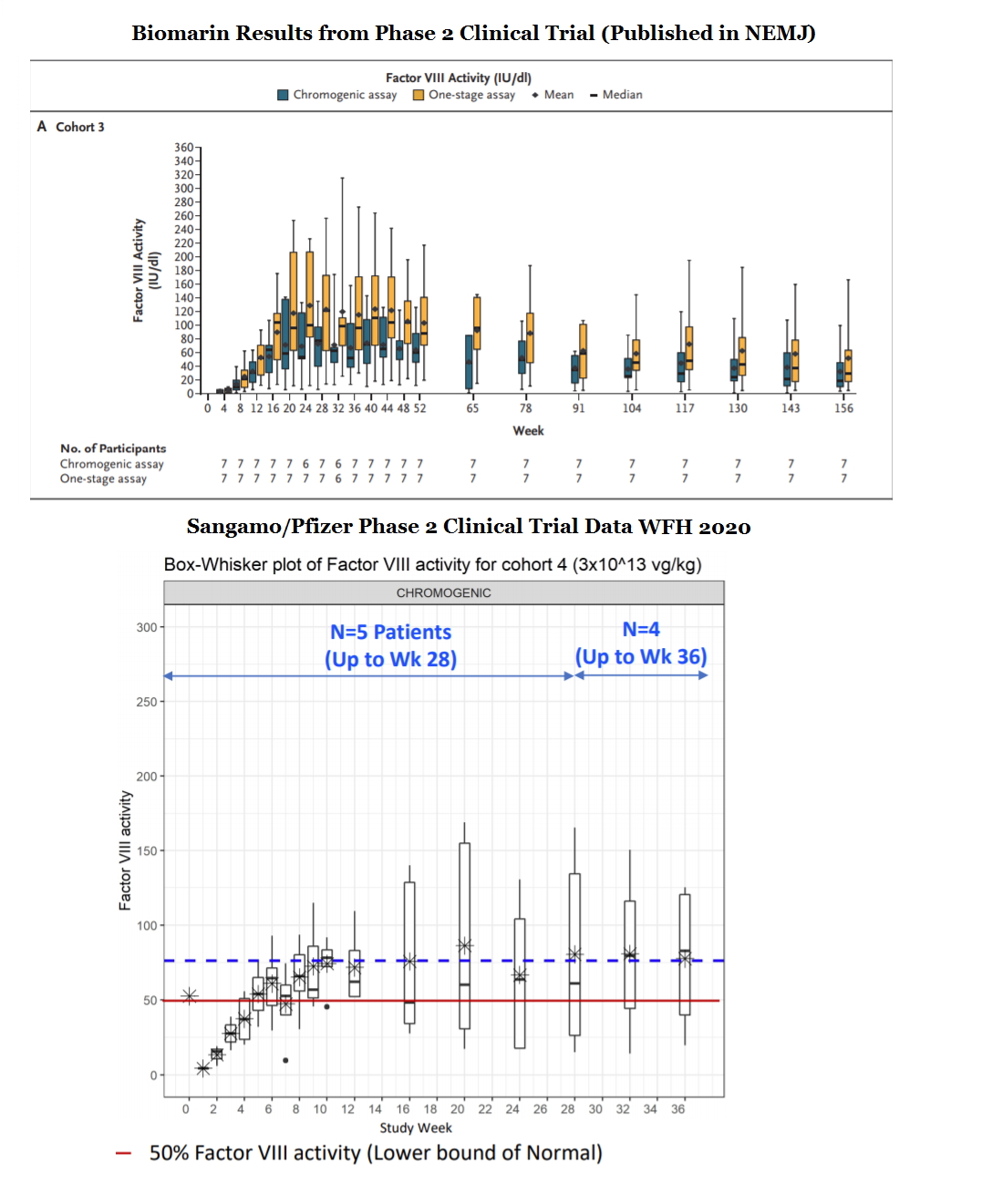