Inclisiran (siRNA) for the Treatment of Hypercholesterolemia: PDUFA Date Set as December 2020

- Inclisiran, an investigational cholesterol-lowering therapy, was added to the pipeline from the Novartis acquisition of The Medicines Company.
- Inclisiran recently received a positive CHMP opinion and recommendation for marketing authorization in Europe and is under review by the US Food and Drug Administration
- Pooled data analyses from Phase III ORION-9, -10 and -11 showed that inclisiran consistently reduced low-density lipoprotein cholesterol (LDL-C) by approximately 51% in both male and female adult patients and in three age categories
- Expected Approvals by End of 2020 or H1 2021 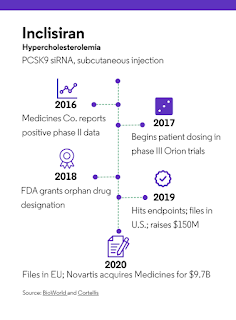 Inclisiran is a double-stranded siRNA, conjugated with GalNAc allowing for targeted uptake by hepatocytes. In hepatocytes, inclisiran silences PCSK9 expression, increasing LDL-C receptor recycling and expression on the hepatocyte cell surface, thereby increasing LDL-C uptake by hepatocytes and lowering LDL-C levels in the circulation.
Inclisiran (ALN-PCSsc) is a long-acting, subcutaneously delivered, synthetic siRNA directed against PCSK9 that is conjugated to triantennary N-acetylgalactosamine carbohydrates. Its twice-yearly dosing by subcutaneous injection may integrate seamlessly into a patient’s healthcare routine.

Regulatory Status
US Food and Drug Administration
The NDA for commercialization of inclisiran is under review by the FDA. The PDUFA date is set as 26 December 2020.
European Market Application
Inclisiran recently received a positive CHMP opinion and recommendation for marketing authorization in Europe.

Post-hoc analyses of Phase III ORION-9, -10 and -11 trials, evaluating the impact of age and gender on the efficacy and safety of inclisiran
Impact of gender on the efficacy of inclisiran vs placebo:
Reference
https://www.novartis.com/news/media-releases/novartis-announces-nejm-publication-three-pivotal-trials-showing-durable-and-potent-efficacy-inclisiran-investigational-first-class-sirna-cholesterol-lowering
Biotechnology Norvatis RNAi