- Lenadogene nolparvovec is an investigational drug for the treatment of LHON
- Developed by GenSight Biologics
- Currently under EMA Review, the MMA application was validated (Nov2020)
- Decision Expected by Q2 2020
- Planned BLA submission to FDA by H2 2021

LHON is a rare, mitochondrial genetic disease, mainly affecting young males. The ND4 mutation results in the worst visual outcomes, with most patients becoming legally blind. There continues to be a high unmet medical need for the 800-1200 new ND4 LHON patients in Europe and the U.S. each year, particularly those who are struck blind in their prime working years.

Lenadogene nolparvovec (tradename: LUMEVOQ®) is a recombinant adeno-associated viral vector, serotype 2 (rAAV2/2), containing a cDNA encoding the human wild-type mitochondrial NADH dehydrogenase 4 protein (ND4), which was specifically developed for the treatment of LHON associated with a mutation in the ND4 gene.

EMA/MMA
GenSight submitted the MAA based on the benefit-risk balance established by results from a Phase I/IIa study (CLIN-01), two pivotal Phase III efficacy studies (CLIN-03A: RESCUE, and CLIN-03B: REVERSE) and the long-term follow up study of RESCUE and REVERSE (CLIN 06 - readout at Year 3 post injection), supported by a statistics-based indirect comparison methodology to establish the gene therapy’s efficacy compared to natural history.

FDA/BLA
The Company is also working towards submitting LUMEVOQ®’s Biologics License Application (BLA) to the U.S. Food and Drug Administration (FDA) in H2 2021

Efficacy
A total of 61 patients accepted the invitation to enroll in CLIN06 (30 from RESCUE and 31 from REVERSE). The subjects were treated with LUMEVOQ® in one eye and with sham injection in the other.
At the start of the long-term follow-up, or at 2 years post-treatment, the subjects had already experienced an average gain of +18.8 letters equivalent* relative to the low point (their “nadir) of their visual acuity in their LUMEVOQ®-treated eyes and +17.3 letters equivalent in their sham-treated eyes. One year later, or three years after the one-time injection, the bilateral benefit was maintained, with LUMEVOQ®-treated eyes recording a mean improvement against nadir of +20.5 letters equivalent and sham-treated eyes demonstrating a mean improvement of +19.4 letters equivalent.
Statistical analysis of pooled data from LUMEVOQ® trials and natural history studies
Treated eyes showed progressive and sustained improvement from Month 12 to Month 52, in contrast to the absence of recovery over the same period for untreated eyes. At Month 18, the difference became statistically significant (p=0.01). By Month 48, the difference between the mean visual acuity in treated patients and that in untreated patients was both statistically significant (p<0.01) and clinically meaningful (-0.33 LogMAR, or +16.5 ETDRS letters equivalent, in favor of treated eyes). 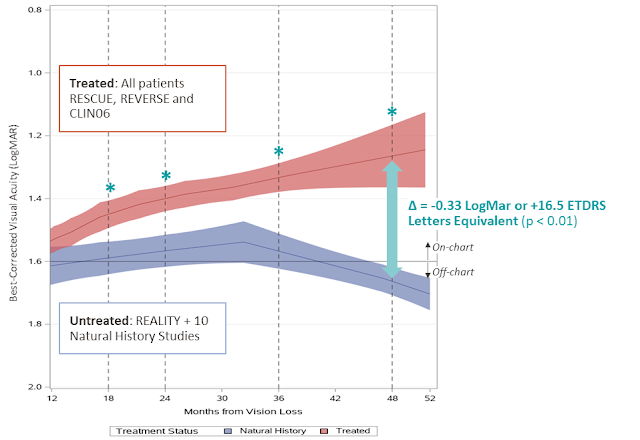 Figure 1: Evolution of Visual Acuity in LUMEVOQ®-treated Patients (N=76) versus Untreated Patients (N=208)
Safety
Safety findings at 3-years were consistent with previous readouts, which concluded that LUMEVOQ® is well-tolerated: no serious adverse events were recorded among LUMEVOQ®-treated eyes, and no discontinuations occurred due to ocular events. There were no systemic serious adverse events or discontinuations related to study treatment or study procedure.
Reference
https://www.gensight-biologics.com/
Biotechnology Gene Therapy GenSight