on November 11, 2020
SPINRAZA (nusinersen) injection, for intrathecal use
Nusinersen is a modified antisense oligonucleotide, where the 2’-hydroxy groups of the ribofuranosyl rings are replaced with 2’-O-2-methoxyethyl groups and the phosphate linkages are replaced with phosphorothioate linkages. Nusinersen binds to a specific sequence in the intron downstream of exon 7 of the SMN2 transcript.
The molecular formula of SPINRAZA is C234H323N61O128P17S17Na17 and the molecular weight is 7501.0 daltons.
Mechanism of Action
SPINRAZA is an antisense oligonucleotide (ASO) designed to treat SMA caused by mutations in chromosome 5q that lead to SMN protein deficiency. Using in vitro assays and studies in transgenic animal models of SMA, SPINRAZA was shown to increase exon 7 inclusion in SMN2 messenger ribonucleic acid (mRNA) transcripts and production of full-length SMN protein.
Pharmacokinetics
Absorption
Intrathecal injection of SPINRAZA into the cerebrospinal fluid (CSF) allows nusinersen to be distributed from the CSF to the target central nervous system (CNS) tissues. Following intrathecal administration, trough plasma concentrations of nusinersen were relatively low, compared to the trough CSF concentration. Median plasma Tmax values ranged from 1.7 to 6.0 hours. Mean plasma Cmax and AUC values increased approximately dose-proportionally up to a dose of 12 mg.
Distribution
Autopsy data from patients (n=3) showed that SPINRAZA administered intrathecally was distributed within the CNS and peripheral tissues, such as skeletal muscle, liver, and kidney.
Metabolism
Nusinersen is metabolized via exonuclease (3’- and 5’)-mediated hydrolysis and is not a substrate for, or inhibitor or inducer of CYP450 enzymes.
Excretion The mean terminal elimination half-life is estimated to be 135 to 177 days in CSF, and 63 to 87 days in plasma. The primary route of elimination is likely by urinary excretion for nusinersen and its chain-shortened metabolites. At 24 hours, only 0.5% of the administered dose was recovered in the urine.
Initial U.S. Approval: 2016

DOSAGE AND ADMINISTRATION
Important Preparation and Administration Instructions
Laboratory Testing and Monitoring to Assess Safety
DOSAGE FORMS AND STRENGTHS
CONTRAINDICATIONS
None.
WARNINGS AND PRECAUTIONS
ADVERSE REACTIONS
The most common adverse reactions that occurred in at least 20% of SPINRAZA-treated patients and occurred at least 5% more frequently than in control patients were:
Reference: FDA product Inserts 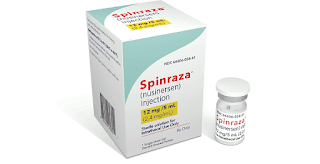