on January 14, 2023
Notes on Typhoid fever, the diagnosis, treatment, and prevention of Typhoid
Typhoid fever and paratyphoid fever (Salmonella typhi and Salmonella paratyphi A, B, and C) - Salmonella are found as a gut flora in many vertebrate species.
- People at any age are susceptible to the infection, children in developing countries are at higher risk.
- The common and one of the main characteristics of typhoid infection is high-grade fever and diarrhea (gastroenteritis /food poisoning), when the infection becomes chronic, septicemia can also occur and a person may die when treatment is not available.
- The infection is most common in the subtropical and tropical parts of the world, prevalence is usually high in the countries where there is a lack of clean drinking water supply. 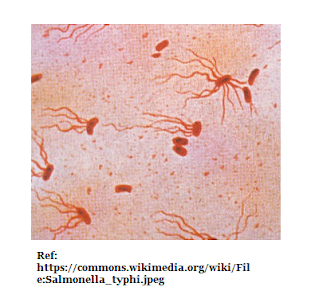 Morphology:
- Motile, facultative, gram-negative rods/bacillus
- Non-spore-forming
- S. typhi is capsulated and only some strains of S. paratyphi are capsulated

Virulence Factors:
- Salmonella typhi and S. paratyphi possess flagellar antigen (H), somatic antigen (O) and capsular antigen (Vi)
- S. typhi consists of AB enzymatic toxin known as typhoid toxin/endotoxin
Pathogenesis:
The bacteria reach the gut through ingestion of contaminated food or water, the incubation period is two to three weeks
- Attachment to the microvilli and penetration to the ileal mucosa of the intestine
- Multiplication of the bacteria via the thoracic duct and invades the bloodstream causing bacteremia during the first week of the infection
- Infections occur in the liver, gall bladder, kidney during the second week
- Enter the gall bladder and involves the Peyer's patches of the ileum
- Ulceration of the ileum also called “typhoid ulcers” may occur in serious and chronic conditions
- During the infection period a person develops high-grade fever, nausea, vomiting, abdominal pain, some may experience diarrhea. Some patients may develop rose spots around the abdomen
Epidemiology:
- Endemic infections occur in countries with poor sanitation and hygiene,
- Fewer cases are observed in the developed countries
- Typhoid fever is more prevalent than paratyphoid fever
- S. paratyphoid B and C are rare
- S. paratyphii A is more prevalent in Asian countries, South America, and Eastern Europe
- The bacteria infects all age groups but is mostly seen in the 5- 20 years age group
- The patient may shed the bacteria in the feces from three weeks to three months after the cure, these people are called the convalescent carriers and are the source of the infection
- Typhoid fever can occur as an endemic or epidemic type
Symptoms (Typhoid fever and paratyphoid):
- High-grade fever (102 to 104 degrees celsius) and body aches are very common. Chills, abdominal pain, diarrhea, and loss of appetite are other symptoms that usually appear within a week after exposure to the bacteria.
- Muscle weakness, headache, sweating, fatigue can last up to weeks after the onset of the disease
Isolation and Identification of the bacteria are done by collecting the specimen from the infected patient.

Laboratory Diagnosis:
Blood culture
- Blood specimen is the standard and most commonly used specimen for the diagnosis of the infection.
- 5- 10 ml of blood is collected during the first to second weeks of infection, inoculated in bile broth, and incubated overnight.
- Mac Conkey agar is the most commonly used media for the subculture method, in the identification and differentiation of enteric gram-negative bacteria. The optimal incubation period is 37-degree Celcius for 24 hours for Salmonella spp.
-Salmonella typhi and S. paratyphi are non lactose fermenters, round colorless colonies appear on the Mac Conkey agar usually after 24 hours of the incubation period. Bacteria usually show non-hemolytic properties when cultured on blood agar.
Stool culture
- Specimens are collected during the first to second weeks of the infection, directly plated on Mac Conkey, DCA, and Wilson-Blair media at 37-degree Celcius.
- Colonies appear usually after 24 hours of incubation.

Urine culture
The urine sample is centrifuged and the deposit is plated in the Wilson-Blair media and inoculated in selenite and tetrathionate broth.
Biochemical tests are performed for the proper identification of the enteric bacilli, catalase, and oxidase tests are done.

Microscopy
Detected by gram staining method, S. typhi and S. paratyphi appear as gram-negative bacilli /rods
Widal test (Serological test)
- Usually positive after the first week of infection
- Detection of the antibodies against O and H antigens
- Confirmed by the presence of O and H agglutinins for typhoid and H for paratyphoid (A and B) bacilli in the patient’s serum