Imiglucerase (Cerezyme) for the Treatment of Type 1 Gaucher Disease

on December 02, 2020
Cerezyme (imiglucerase for injection)
Gaucher disease is characterized by a deficiency of β-glucocerebrosidase activity, resulting in accumulation of glucocerebroside in tissue macrophages which become engorged and are typically found in the liver, spleen, and bone marrow and occasionally in lung, kidney, and intestine. Secondary hematologic sequelae include severe anemia and thrombocytopenia in addition to the characteristic progressive hepatosplenomegaly, skeletal complications, including osteonecrosis and osteopenia with secondary pathological fractures.
Cerezyme® (imiglucerase for injection) is an analogue of the human enzyme β-glucocerebrosidase, produced by recombinant DNA technology. β-Glucocerebrosidase (β-D-glucosyl-N-acylsphingosine glucohydrolase, E.C. 3.2.1.45) is a lysosomal glycoprotein enzyme which catalyzes the hydrolysis of the glycolipid glucocerebroside to glucose and ceramide. Cerezyme is produced by recombinant DNA technology using mammalian cell culture (Chinese hamster ovary). 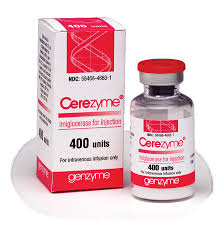 Purified imiglucerase is a monomeric glycoprotein of 497 amino acids, containing 4 N-linked glycosylation sites (Mr = 60,430). Imiglucerase differs from placental glucocerebrosidase by one amino acid at position 495, where histidine is substituted for arginine. The oligosaccharide chains at the glycosylation sites have been modified to terminate in mannose sugars. The modified carbohydrate structures on imiglucerase are somewhat different from those on placental glucocerebrosidase. These mannose-terminated oligosaccharide chains of imiglucerase are specifically recognized by endocytic carbohydrate receptors on macrophages, the cells that accumulate lipid in Gaucher disease.
Cerezyme® (imiglucerase for injection) catalyzes the hydrolysis of glucocerebroside to glucose and ceramide. In clinical trials, Cerezyme improved anemia and thrombocytopenia, reduced spleen and liver size, and decreased cachexia to a degree similar to that observed with Ceredase® (alglucerase injection).
INDICATIONS AND USAGE
Cerezyme® (imiglucerase for injection) is indicated for long-term enzyme replacement therapy for pediatric and adult patients with a confirmed diagnosis of Type 1 Gaucher disease that results in one or more of the following conditions:
anemia
thrombocytopenia
bone disease
hepatomegaly or splenomegaly

CONTRAINDICATIONS There are no known contraindications to the use of Cerezyme® (imiglucerase for injection). Treatment with Cerezyme should be carefully re-evaluated if there is significant clinical evidence of hypersensitivity to the product.
WARNINGS
Approximately 15% of patients treated and tested to date have developed IgG antibody to Cerezyme® (imiglucerase for injection) during the first year of therapy. Patients who developed IgG antibody did so largely within 6 months of treatment and rarely developed antibodies to Cerezyme after 12 months of therapy.
Approximately 46% of patients with detectable IgG antibodies experienced symptoms of hypersensitivity. Patients with antibody to Cerezyme have a higher risk of hypersensitivity reaction. Conversely, not all patients with symptoms of hypersensitivity have detectable IgG antibody. It is suggested that patients be monitored periodically for IgG antibody formation during the first year of treatment.
Treatment with Cerezyme should be approached with caution in patients who have exhibited symptoms of hypersensitivity to the product. Anaphylactoid reaction has been reported in less than 1% of the patient population.
Further treatment with imiglucerase should be conducted with caution. Most patients have successfully continued therapy after a reduction in rate of infusion and pretreatment with antihistamines and/or corticosteroids.
ADVERSE REACTIONS
Since the approval of Cerezyme® (imiglucerase for injection) in May 1994, Genzyme has maintained a worldwide post-marketing database of spontaneously reported adverse events and adverse events discussed in the medical literature. The percentage of events for each reported adverse reaction term has been calculated using the number of patients from these sources as the denominator for total patient exposure to Cerezyme since 1994.
OVERDOSE
Experience with doses up to 240 U/kg every 2 weeks have been reported. At that dose there have been no reports of obvious toxicity.
Enzyme Replacement PHARMACOLOGY