Primary Outcome Measures
GB-206 (Phase 1/2 open-label study)
GB-206 is an ongoing, Phase 1/2 open-label study designed to evaluate the efficacy and safety of LentiGlobin gene therapy for sickle cell disease (SCD) that includes three treatment cohorts: Groups A (n=7), B (n=2) and C (n=32).
A refined manufacturing process designed to increase vector copy number (VCN) and further protocol refinements made to improve engraftment potential of gene-modified stem cells were used for Group C. Group C patients also received LentiGlobin for SCD made from HSCs collected from peripheral blood after mobilization with plerixafor, rather than via bone marrow harvest, which was used in Groups A and B of HGB-206.
Results from Phase 2 Study
In patients with six or more months of follow-up whose hemoglobin fractions were available (n=22), median levels of gene therapy-derived anti-sickling hemoglobin, HbAT87Q, were maintained with HbAT87Q contributing at least 40% of total hemoglobin at Month 6. At last visit reported, total hemoglobin ranged from 9.6 – 15.1 g/dL and HbAT87Q levels ranged from 2.7 – 8.9 g/dL. At Month 6, the production of HbAT87Q was associated with a reduction in the proportion of HbS in total hemoglobin; median HbS was 50% and remained less than 60% at all follow-up time points. All patients in Group C were able to stop regular blood transfusions by three months post-treatment and remain off transfusions as of the data cut-off. 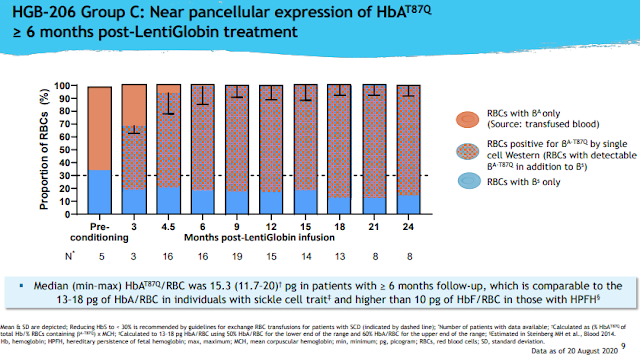