on December 02, 2020
Ceredase® (alglucerase injection)
Ceredase® (alglucerase injection) is a modified form of the enzyme, ß-glucocerebrosidase ß-D-glucosyl-N-acylsphingosine glucohydrolase, EC 3.2.1.45). Alglucerase is a monomeric glycoprotein of 497 amino acids with carbohydrates making up approximately 6% of the molecule (Mr = 59,300 as determined by SDS-PAGE). The unmodified enzyme (ß-glucocerebrosidase) also contains 497 amino acids and contains approximately 12% carbohydrate (Mr = 67,000). The carbohydrates on the unmodified enzyme consist of N-linked carbohydrate chains of the complex and high mannose type. Glucocerebrosidase and alglucerase catalyze the hydrolysis of the glycolipid, glucocerebroside, within the lysosomes of the reticuloendothelial system. Alglucerase is prepared by modification of the oligosaccharide chains of human ß-glucocerebrosidase. The modification alters the sugar residues at the non-reducing ends of the oligosaccharide chains of the glycoprotein so that they are predominantly terminated with mannose residues which are specifically recognized by carbohydrate receptors on macrophage cells. 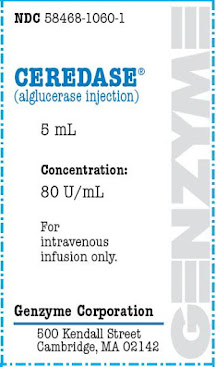 Ceredase® (alglucerase injection) catalyzes the hydrolysis of the glycolipid, glucocerebroside, to glucose and ceramide as part of the normal degradation pathway for membrane lipids. Glucocerebroside is primarily derived from hematologic cell turnover. Gaucher disease is characterized by a functional deficiency in ß-glucocerebrosidase enzymatic activity and the resultant accumulation of lipid glucocerebroside in tissue macrophages which become engorged and are termed Gaucher cells. Gaucher cells are typically found in liver, spleen and bone marrow and occasionally, as well, in lung, kidney and intestine. Secondary hematologic sequelae include severe anemia and thrombocytopenia in addition to the characteristic progressive hepatosplenomegaly. Skeletal complications, including osteonecrosis and osteopenia with secondary pathological fractures, are a common feature of Gaucher disease.
INDICATIONS AND USAGE
Ceredase® (alglucerase injection) is indicated for use as long-term enzyme replacement therapy for children, adolescents, and adult patients with a confirmed diagnosis of Type I Gaucher disease who exhibit signs and symptoms that are severe enough to result in one or more of the following conditions
a) moderate-to-severe anemia;
b) thrombocytopenia with bleeding tendency;
c) bone disease;
d) significant hepatomegaly or splenomegaly.
DOSAGE AND ADMINISTRATION Ceredase® (alglucerase injection) is administered by intravenous infusion over 1-2 hours. Dosage should be individualized for each patient. Initial dosage may be as little as 2.5 units/kg of body weight 3 times a week up to as much as 60 units/kg administered as frequently as once a week or as infrequently as every 4 weeks. 60 units/kg every 2 weeks is the dose for which the most data are available. Disease severity may dictate that the drug be initiated with relatively high doses or relatively frequent administration. After the patient response is well-established, a reduction in dosage may be attempted for maintenance therapy. Progressive reductions can be made at intervals of 3-6 months while carefully monitoring response parameters.
CONTRAINDICATIONS There are no known contraindications to the use of Ceredase® (alglucerase injection).
WARNINGS
PRECAUTIONS
General Therapy with Ceredase® (alglucerase injection) should be directed by physicians knowledgeable in the management of patients with Gaucher disease. Treatment with Ceredase® should be approached with caution in patients who have exhibited symptoms of hypersensitivity to the product. Pretreatment with antihistamines has allowed continued use of Ceredase® in some patients. (See full prescribing information)

ADVERSE REACTIONS
OVERDOSE
No obvious toxicity was detected after single doses up to 234 units/kg. There is no experience with larger doses.
Enzyme Replacement PHARMACOLOGY