A randomized, double-blind, placebo-controlled trial evaluating the safety and efficacy of VY-AADC for the treatment of Parkinson’s disease in 75-100 patients (each trial) with motor fluctuations that are refractory to medical management.
Population: PD diagnosis > 4 yrs, are not responding adequately to oral medications, and have > 3 hours of OFF time. Randomized (1:1) to one-time administration of VY-AADC (for a total dose of up to 2.5×1012 vector genomes) or placebo surgery.
Experimental Treatment: VY-AADC02 (NBIb-1817)
A single administration of up to 3.6 x 10^12 vector genomes (vg) of VY-AADC02

- one-time treatment with investigational gene therapy, NBIb-1817 (VY-AADC),
- showed a sustained improvement in motor function including greater "On" time without troublesome dyskinesia,
- reduction in Unified Parkinson's Disease Rating Scale (UPDRS) Part III scores, and
- reduction in the amount of medications in patients with Parkinson's disease. In the PD-1101 study,
- NBIb-1817 reduced average "Off" time by up to -1.91 hours and improved average "On" time without troublesome dyskinesia by up to +2.23 hours in patients with advanced Parkinson's disease after three years across three cohorts.
- In addition, 14 out of 15 patients treated with NBIb-1817 continued to show an improvement in disease staging after three years, as assessed by the modified Hoehn & Yahr scale.
Reference: Voyager Therapeutics and Neurocine Bioscience Press Release
Therapeutic Approach 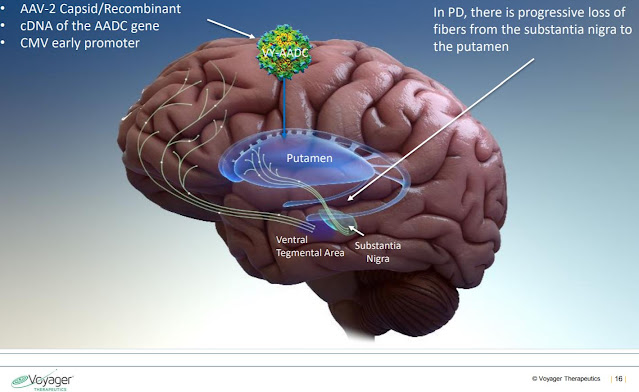 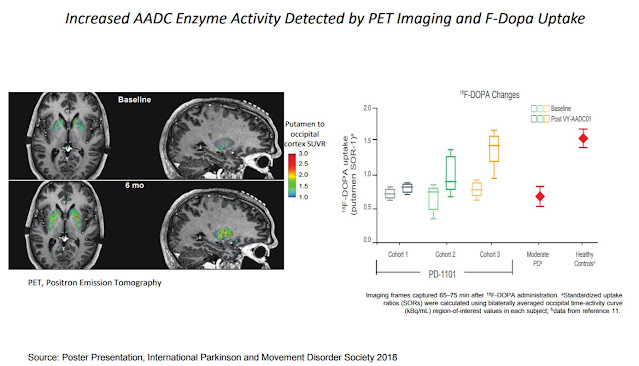