The double-stranded AAV genome is generated by mutating the terminal resolution site sequence on one side of the inverted terminal repeats (ITR), leading to the production of self-complementary AAV (scAAV). A genome <2.5 kilobases (kb; approximately half the size of the wild-type AAV genome) can therefore be packaged as a dimer in the AAV vector with the package size limit of 4.7kb. 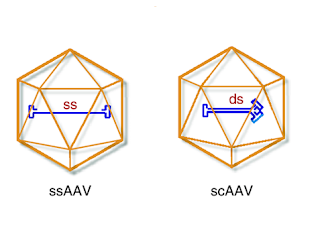 Mendell et al 2017 (published in NEJM) showed that a single administration of AAV9 containing the self-complementary SMN gene showed a persistent & durable expression of the SMN gene and improved motor function in subjects with Spinal Muscular Atrophy Type 1 (SMA) for up to 30 months. CHOP INTEND was used for the assessment of motor function.
Zhang et al 2020 (published in Science) evaluated the efficiency of ssAAV- and scAAV-packaged sgRNAs that target exon 45 regions of the DMD gene in C2C12 mouse myoblast cells. In this stud, SpCas9-expressing C2C12 mouse myoblasts myotubes(differentiated myoblast) were transduced with each of the AAVs. One week after viral transduction, decomposition (TIDE) analysis was used to detect INDELs within the Dmd exon 45 regions.
The study found the dose-dependent increase in total INDELs for both ssAAV- and scAAV-expressed sgRNA 1 week after viral transduction. Specifically, to reach a 10% threshold level of INDELs, scAAV (5 x e8 vg/ml) and ssAAV (1 × e10 vg/ml) were required, representing a 20-fold increase in efficiency of scAAV. To reach an intermediate level of INDELs of ~22%, 40-fold less scAAV (1.8 × e9 vg/ml) was required compared to ssAAV (7.8 × e10 vg/ml). Furthermore, a high level of INDELs (over 40%) was achieved by scAAV (7.2 × 109 vg/ml), whereas ssAAV required 5 × 1012 vg/ml, representing a 70-fold improvement in efficiency with scAAV.

Methods for Preparation of scAAV vector