1)Which of the following are the important opportunistic fungal infections?
Select all the correct options:
a) Aspergillosis
b) Listeriosis
c) Oculomycosis
d) Mucormycosis

2) Which of the following statement is Not the general characteristics of Candida albicans?
a) It is found as normal flora in the human body
b) It is a commonly found yeast infection
c) It appears in two forms yeast and filamentous form
d) It is the most common pathogen of respiratory infections

3) Which of the following pathogenic fungus is a part of human microbiota?
a) Aspergillus niger
b) Cryptococcus neoformans
c) Candida albicans
d) Rhizopus oryzae

4) Zygomycosis/ mucormycosis is usually caused by which of the following fungi?
Select all the correct answers:
a) Plasmodium spp
b) Rhizopus spp
c) Mucor spp
d) Histoplasma spp

5) A 11 years old girl visited a clinic with white lesions around the mouth and tongue, the girl developed fever, swelling, and pain around the infected area for 2 days.
A swab specimen was taken and microscopic examination showed budding spherical cells of fungi with hyphae. After 24 hours of a culture of the specimen, smooth cream-colored colonies were observed.
Name the most possible pathogen responsible for the infection?
a) Rhizopus oryzae
b) Aspergillus fumigatus
c) Pneumocystis jiroveci
d) Candida albicans

6) All of the following are the morphological characteristics of Cryptococcus neoformans, EXCEPT?
a) It is a capsulated yeast
b) It is present in cow dung
c) Produces urease
d) None of the above

7)The black fungi spores are present in the environment which is also a medically important human pathogen. Diagnosed as a deadly fungal infection in the COVID-19 patients primarily who were diabetic or who were in the intensive care unit for a long time.
Name the possible mycosis reported during the second wave of COVID-19 in India
a) Candidiasis
b) Aspergillosis
c) Mucormycosis
d) Penicilliosis

9) All of the following statements regarding Aspergillus fumigatus, termed as white fungus are correct, Except?
a) A common laboratory contaminant
b) It can easily spread from person to person
c) The common cause of fungi related asthma
d) The major cause of systemic mycoses

10) 'Aflatoxin' is usually present in moldy foods such as nuts and corn which can be poisonous for animals as well as humans.
Name the possible pathogen which produces this toxin?
a) Aspergillus flavus
b) Clostridium botulinum
c) Bacillus anthracis
d) Aspergillus niger


11) A 50 year old man suffered a burn injury in the right arm, after a few days he developed blisters and ulcers around the burnt area. During the routine examination, redness and swelling around the infected area were observed. Fungal infection was suspected and biopsy was done, direct microscopic examination showed thick, branched septate hyphae with a black round tip. In culture, cottony colonies can be observed after a few hours of incubation.
Name the possible pathogen responsible for the infection?
a) Pneumocystis jeroveci
b) Rhizopus oryzae
c) Coccidioides immitis
d) Aspergillus flavus

12) Which of the following antibiotics is found to be most effective for the treatment of pulmonary aspergilloma?
a) Penicillin G
b) Fluconazole
c) Ketoconazole
d) Amphotericin B

13) Name the fungal infection which is most commonly seen in patients with advanced HIV/AIDS with the wart-like skin lesions which often appear on the face?
a) Mucormycosis
b) Histoplasmosis
c) Penicillosis
d) Blastomycosis

16) Which of the following fungus is not the type of fungi associated with emerging opportunistic fungal infections in AIDS patients?
a. Fusarium chlamydosporum
b. Penicillium marneffei
c. Trichosporon beigelii
d. Rhizopus stolonifer
17) In recent years, opportunistic mycoses in immunocompromised individuals is caused by various types of fungi including molds.
All of the following are examples of yeasts and molds, EXCEPT?
a. Aspergillus niger
b. Histoplasma capsulatum
c. Acremonium spp
d. Fusarium spp
e. Trichosporon beigelii
f. Candida krusei
18) All of the following are the common sites of infections caused by C. albicans, Except?
a. Mouth
b. Throat
c. Groin of infants
d. Vaginal area
19) Which of the following are Not the common characteristics of  A. fumigatus and A. flavus?
a. Both of the organisms secrete aflatoxins
b. Present in the environment
c.  A. flavus is also a common plant pathogen
d. Both fungi are types of molds
20) Fusarium solani is one of the most common fungal pathogens which causes infections in immunocompromised patients.
Which of the following statement is Not true about the characteristic features of the pathogen?
a. Found in soils
b. Skin infections in human
c. Commensal of the human intestines
d. A common plant pathogen
Answers:
1- a), c) and d)
2- d) Most common pathogen of the respiratory infections

3- c) Candida albicans
4- b) Rhizopus spp, and c) Mucor spp
5- d) Candida albicans
6- b) Present in cow dung
7- c) Mucormycosis
8- a) Cryptococcus neoformans
9- b) It can spread from person to person
10-a) Aspergillus flavus
11-b) Rhizopus oryzae
12-d) Amphotericin B
13- c) Penicillosis
14- b) Pneumocystis jiroveci
15-a) Candida albicans
16-d) Rhizopus stolonifer
17-b) Histoplasma capsulatum
18-b) Throat
19)-a) Both of the organisms secrete aflatoxins
20)-c) Commensal of human intestines 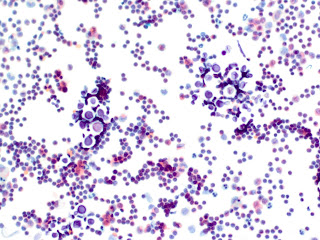