on February 08, 2022
Multiple Choice Question on
MCQ on Subcutaneous Mycoses

1) A 35-year-old man residing in Mexico comes to the hospital with an ulcerative lesion in his left thumb and has been suffering for 2 weeks. He got a cut while taking care of the plants in his garden, in the first week the lesion did not grow or spread but it spread to the forearm and was more painful in the second week.
The sample from the infected site was cultured for fungal examination, cream-colored colony appeared within 3 days. The colony growth appeared brown after a few days and changed to black and fuzzy in appearance after a week of incubation.
Which of the following is the likely pathogen?
a) Epidermophyton flocussum
b) Tinea versicolor
c) Sporothrix schenckii
d) Basidiobolus ranarum

2) Which of the following are NOT the cultural characteristics of fungus causing subcutaneous mycoses?
a) Classification Includes dimorphic fungi
b) The infections are caused by saprophytic fungi
c) It usually occurs in tropical regions
d) Majority of fungi causes superficial skin infections

3) Which is the other likely pathogen that mimics the skin lesions same as Sporothrix schenckii when observed under the microscope?
a) Rickettsia spp
b) Nocardia spp
c) Aspergillus
d) None of the above

4) All of the following statements are true about dematiaceous fungi, EXCEPT?
a) They have dark pigments in their cell wall
b) Induce a granulomatous reaction
c) Formation of conidia in cultures
d) Reproduces by sexual process

6) Which of the following is the most correct statement about eumycotic mycetoma?
a) It is characterized by infectious granulomas and abscesses
b) The disease is more frequent in colder regions
c) It spreads from one person to another very easily
d) The mycoses are usually superficial

7) What are the primary sites of invasion in eumycotic mycetoma?
a) Neck and face
b) Hair shafts
c) Legs and hands
d) Chest and back

8) Which of the following is the main etiological agent for mycoses of foot mostly occurring in the Indian subcontinent and the middle east?
a) Sporothrix schenckii
b) Phialophora verrucosa
c) Conidiobolus coronatus
d) Madurella mycetomatis

9) Which of the following is the most common likely pathogen that causes actinomycotic mycetoma?
a) Madurella spp
b) Nocardia spp
c) Exophiala spp
d) Fusarium spp

11) Which of the following statement is true about the treatment of eumycotic mycetoma?
a) Administration of itraconazole and potassium iodide solution is effective
b) Surgery or amputation is the choice of treatment in most cases
c) Amphotericin B and Ketoconazole are the drugs of choice
d) None of the above

13) Which fungus is responsible for the subcutaneous mycotic infections of the nasal cavity and face?
a) Histoplasma capsulatum
b) Basidiobolus ranarum
c) Blastomyces dermatitidis
d) Conidiobolus corronatus

14) Which of the following is the drug of choice for sporotrichosis?
a) Itraconazole
b) Amphotericin B
c) Ketoconazole
d) Posaconazole

15) What is the type of lesions mostly seen in chromoblastomycosis?
a) Abscesses with granulomas
b) Painless lesions having a cyst
c) Dark pigmented wart-like skin lesions
d) All of the above
16) "Madura foot" was first diagnosed in India during the 1800s
a) True
b) False
17) A 14 year old boy is presented to the hospital with the swollen upper part of the left thigh for the last 6 months, the boy did not have any particular symptoms like fever and did not complain of pain in the swollen area during the physical examination.
The tissue sample was taken for laboratory examination, in the fungal staining method, wide aseptate hyphae were observed under the microscope. Fungal culture method was performed, waxy, yellow and round colonies appeared after a few days of incubation.
Which of the following could be the possible fungi?
a) Rhinosporidium spp
b) Basidiobolus spp
c) Aspergillus spp
d) Rhizopus spp
18) From the above question, the fungi responsible for the infection is also called the following type of mycosis
a) Phaeohyphomycosis
b) Aspergillosis
c) Hyalohyphomycosis
d) Subcutaneous phycomycosis
19) Which of the following statements is Not correct regarding chromoblastomycosis?
a) It is the disease condition caused by dematiaceous fungi
b) People working with soil, usually in rural areas can develop the disease
c) Immunocompromised patients are at higher risk
d)Microscopic examination of the tissues show the "sclerotic bodies"
e)Microscopic examination of the tissues show the "asteroid bodies"
f) A granulomatous fungal infection of cutaneous and subcutaneous tissues
20) All of the following fungi are the common cause of mycotic mycetoma, Except?
a) Nocardia brasiliensis
b) Fusarium solani
c) Actinomadura madurae
d) Mycoplasma hominis
e) Nocardia asteroides
f) Madurella mycetomatis
Answers:
1-c) Sporothrix schenckii
2-d) Majority of fungi causes superficial skin infections
3-b) Nocardia spp
4-d) Reproduces by sexual process
5-d) Exophilia dermatidis
6-a) It is characterized by infectious granulomas and abscesses
7-c) Legs and hands
8-d) Madurella mycetomatis
9-b) Nocardia spp
10-a), c), d), and f)
( Toxoplasmosis is an infection caused by a parasite), Histoplasmosis is a fungal infection that usually causes deep mycosis
11-b) Amputation is the choice of treatment in most cases
12-b) Rhinocladiella aquaspersa
13-d) Conidiobolus corronatus
14-a) Itraconazole
15-c) Darkly pigmented wart-like skin lesions
16-a) True
17-b) Basidiobolus spp
18)-d) Subcutaneous phycomycosis
19- e) Microscopic examination of the tissues show the "asteroid bodies"
(Asteroid bodies is common in tissues infected with sporotrichosis)
20- d) Mycoplasma hominis 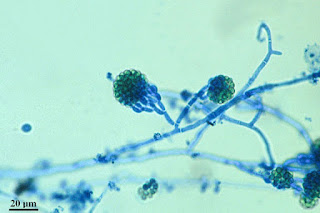