on August 10, 2021
Anti-drug antibody (ADA) assay is a semi-quantitative bioanalytical method that detects the antibodies specific to the drug. The ADA assay utilizes the assay cut point above which the samples are considered positive. The assay cut points are established by analyzing a set of approximately 50 drug-naive individuals with an assumption that these selected samples do not contain any pre-existing antibodies.

While this is true for most ADA assays, in some instances, there is a high probability of prevalent pre-existing antibodies when a closely related antigen is exposed prior to drug administration. The pre-exposure of antigens such as adeno-associated viruses (AAVs), Cas9 protein, and PEG molecule account for preexisting antibodies in clinical subjects. When the preexisting antibody is prevalent in the study population, the cut point should be established carefully to enable the detection of the clinically significant ADA. Applying the recommended statistical cut point calculation method (Shankar et al, 2008) in these preexisting ADA populations may result in elevated cut points and a higher false-negative rate. To overcome this challenge, the immune-inhibition method is reported and acceptable to the FDA regulatory agencies.

Immunoinhibition method for preexisting antibodies
In the immune-inhibition method, the excess drug is added to the treatment of naïve samples and the cut point is established using these drug-spiked samples. The method is based on the principle that the excess drug inhibits the availability of preexisting antibodies to bind to the capture/detection system. The competitive inhibition by the presence of excess drug decreases the assay signal of reactive drug-naive samples. The statistical analysis (target 5% false positive rate) of the immunoinhibition method results in a lower cut point compared to the normal cut-point method. It also improves the detection of clinically significant ADA in clinical studies. 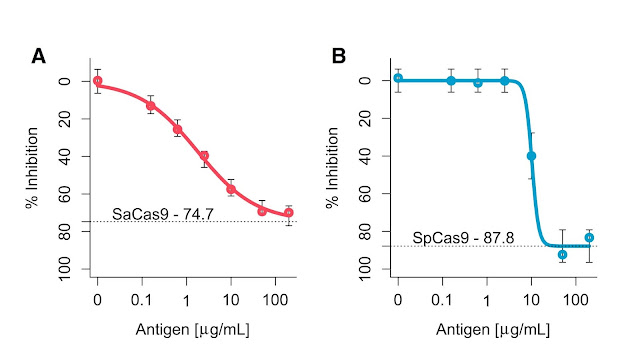 b) Spiking drug to each sample and analyze the drug-spiked sample set
The optimized concentration of a drug is spiked into the drug-naive individual serum and analyzed in the assay. The presence of drugs suppresses the assay signal by binding/saturating preexisting antibodies. As shown in figure 4, individuals without drug spikes are randomly dispersed with varying reactivity. In contrast. the same samples with drug spikes have homogeneously distributed assay signals. Using this data, the cut point calculated at the 95th percentile from the drug inhibition results in lower cut points and a higher positive rate in the population.

Other methods for the cut point calculation include:
a) Removal of pre-existing antibodies using Protein A/G
b) Titer method