The multi-tiered bioanalytical approaches that are commonly implemented for the assessment of immunogenicity include detection (screening, confirmation, and titer) and characterization of the anti-drug antibody. The anti-drug antibody (ADA) positive samples during the screening assay are run in a confirmatory assay. A specificity confirmatory assay eliminates any false positives detected on screen assay. The titers are used to obtain relative quantitation of ADA in the samples. The appropriate assays are developed to characterize the neutralizing capacity of antibodies in the ADA positive samples. Furthermore, assays for relevant biomarkers and/or pharmacokinetic measurements should complement ADA characterization and analysis of their in vivo impact. (Buttel et al, 2011) 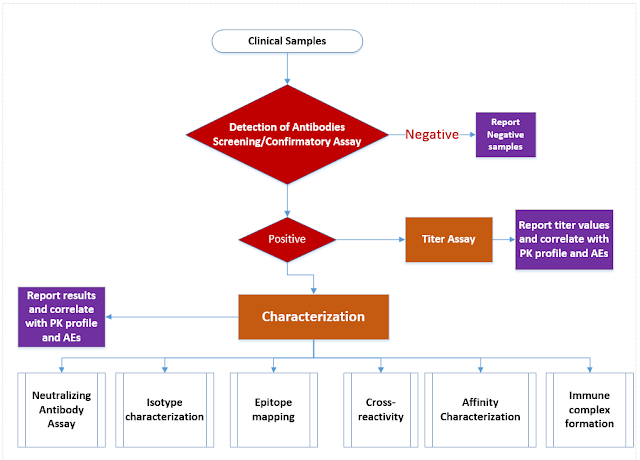 Screening assays are the initial step of immunogenicity that differentiates study samples into potentially negative or positive for the presence of polyclonal anti-drug antibodies based on their ability to recognize a relevant epitope in the therapeutic protein. These screening assays are designed to detect low true positives and typically have cutpoints set with approximately a five percent false positive rate (FPR).
The confirmatory assays are designed to identify the true positives and demonstrate the specific reactivity of antibodies to the drug. The specificity confirmation assay is usually a competitive inhibition test with a specificity cut point set at approximately a 1.0% false-positive rate (Shankar et al, 2008). The confirmatory assay should detect the target analyte unequivocally in the presence of other matrix components that are present in the sample.

In the titer assay, positive samples in screening and confirmatory assay are serially diluted in the matrix and the reciprocal of the lowest dilution whose signal span falls below the cut point is given the titer value. The titer value depends on the affinity of antibodies and the number of antibodies found in the samples. The different classes and affinity of anti-drug antibodies can exist within the same subject or within the disease population treated with TP. The surrogate positive controls have some parallelism but do not truly reflect the antibodies present in the disease population. Therefore, the titer assay does not truly quantitate the concentration of binding antibodies present in the samples and they are considered a quasi-quantitative estimation of anti-drug antibodies.

Neutralizing antibodies (NAbs) bind to the protein therapeutic drug molecule; inhibit its functional activity and decrease the drug efficacy. NAbs may bind directly at the active site of the drug, thereby, hindering its biological function in vivo. NAbs may also bind outside of the active motif of the drug and indirectly interfere with the drug-target interaction by inducing conformation changes or steric hindrance. In some cases, NAbs may cross-react with endogenous proteins, neutralizing their biological activity and resulting in autoimmunity and clinical deficiency syndromes.
Therefore, the characterization of the neutralizing properties of ADA responses may serve as an early indicator of adverse clinical consequences during patient treatment. The characterization of NAb is required when:
a) high sustained total antibody titer positivity is observed,
b) higher incidence of non-responders group after exposure to therapeutic protein (loss of efficacy).

There are two major platforms that are commonly used in NAb assays.
Cell-based NAb assay: Regulatory agencies require the characterization of neutralizing antibodies preferably in the cell-based platform. The cell-based assays are physiologically relevant because the assays are developed based on the mechanism of action such as cell uptake, binding, and cell signaling activity (EMA, 2007; FDA, 2014, Gupta et al., 2007).


Ligand binding NAb assay: Ligand binding NAb assays are based on the ability to neutralize antibodies to interrupt the binding between the drug and its target either of which may be immobilized on a surface. A non-cell-based assay is suitable when a drug's mechanism of action of the drug is to solely neutralize a soluble target. Non-cell-based assays may also be employed for NAbs when the development of reliable cell-based assay is limited due to the unavailability of a cell line or due to assay-related issues e.g. serum toxicity, impaired assay precision, robustness, sensitivity, etc.
Characterization of isotypes classes:
The therapeutic proteins are intrinsically immunogenic and they can simultaneously develop drug reactions and reduce efficacy. Depending on the degree of immunogenicity, type of adverse events, and correlation between immunogenicity and adverse events, the characterization of the isotype classes may be important and it can help to understand mechanisms associated with drug reactions or adverse events. Studies have shown a variable degree of IgG isotype production ranging from 1.9% for velagulcerase alpha treatment for Gaucher to 100% in infantile and late-onset Pompe disease. Measurement of IgE involvement may also have prognostic implications for repeat exposure to ERT and may guide future management. (Kishnani et al, 2016 review).

Epitope characterization or domain characterization of ADA responses is highly recommended for therapeutic proteins with high immunogenicity risk. Dissecting the immunogenicity at the epitope level for therapeutic proteins may provide an understanding of the underlying mechanism that contributes to a defined immune response. Moreover, epitope mapping enables the correlations of specific ADA fractions with loss of efficacy or particular clinical side effects. Knowing epitope-specific ADA may be important to determine the potential cross-reactivity to endogenous proteins (Stubenrauch et al, 2015).

ADA found in circulation binds to the therapeutic protein resulting in the formation of an immune complex, a natural process that neutralizes and clears foreign molecules from circulations. The Fc mediated clearance of the immune complex leads to reduced PK, efficacy, immune complex disorder, or altered potency. In severe cases, a formation of ADA leads to severe events like pure red-cell-aplasia triggered by anti-epoetin alfa antibodies cross-reaction with patients’ own erythropoietin.