Regulatory agencies require a pivotal phase 2/3 study to prove that the outcome of treatment is higher than the potential risk of a proposed therapeutic protein. This study includes evaluation of efficacy and safety of therapeutic proteins for intended use and formulation risk mitigation strategy for adverse/inadvertent events if any. The immunogenicity assessment is the core of assessing safety and efficacy in both clinical and non-clinical studies. Therapeutic proteins (TP) are immunogenic in nature and propensity of immunogenicity is attributed to structure, conformation, and posttranslational modifications of TP. In addition, disease population; individual genetic factors; manufacturing processes, dosages, and route of administration also impact immunogenicity. The clinical outcome of immunogenicity also depends on the affinity against drugs, isotype, amount, and persistence of anti-drug antibodies (ADA) developed, the epitope recognized on the TP, and the ability of ADA to activate complement proteins and other unwanted immune responses.
The clinical consequence of immunogenicity varies with no effect, a reduction/loss of efficacy, and consequential adverse events. Acute consequences include anaphylaxis or infusion reactions. Non-acute consequences include loss of efficacy, cross-reactivity, neutralization of natural endogenous counterparts, and delayed hypersensitivity. Therefore, the systematic evaluation of the immunogenicity profile to ensure risk to patients is necessary during the development and clinical trials of therapeutic agents. 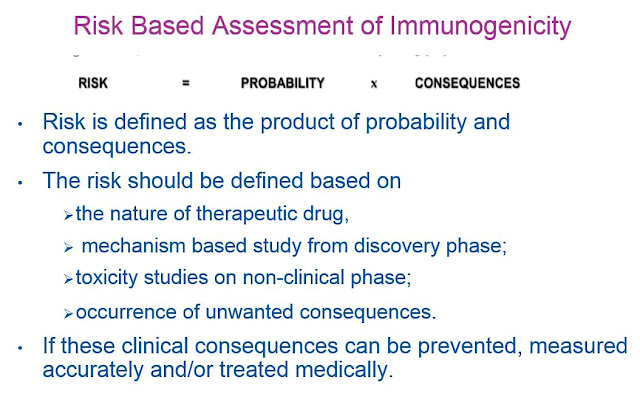 Heterogeneous pathogenic mutations
Pathogenic mutations here refer to a genetic mutation that is causal for the disease-specific phenotype. The correlation between the type of pathogenic mutations and degree of immunogenicity has been observed in both non-clinical and clinical studies. The pathogenic mutations due to large deletions and non-sense mutations have shown to have a higher probability of developing ADAs and neutralizing antibodies (NAbs) in certain diseases such as Pompe disease. NAbs are anti-drug antibodies that directly interfere with TP functions. Studies have shown also that the positive ADAs and NAbs are correlated with various adverse events observed in patients with large deletions or nonsense mutations. In contrast, the extent of ADA is lower in patients carrying smaller deletions or missense mutations. In Pompe disease, for example, subjects with deletion and nonsense mutation resulting in no detectable mRNA and CRIM have higher neutralizing antibodies to the therapeutic enzyme, and ADAs are associated with adverse clinical outcomes. (Wang et al. 2008 ) Similarly, in Fabry disease, the patients with low residual enzyme activity had a higher incidence of developing an anti-drug antibody against therapeutic enzyme compared to higher residual enzyme activity. Genotyping revealed that nonsense mutation and deletion were predominant in patients with low residual enzyme activity, and missense mutations were common with higher residual enzyme activity (Linthorst et al, 2004).
This evidence suggests that subjects with even low levels of the endogenous proteins/enzymes i.e. cross-reactive immunological materials (CRIM) may have higher immunological tolerance and a lower tendency of developing anti-drug antibodies. Thus, understanding disease population; type of mutation, and assessing the endogenous any enzymes/proteins (CRIM) may provide crucial information to define risk in clinical studies.


Immunogenicity depends on disease type and population
The heterogeneity of genetic factors drives the disease pathology and immune status in the disease population. These factors add the complexity of predicting and assessing immunogenicity profiles in various disease populations. Previous and ongoing clinical studies have shown higher immunogenicity risk to the patients treated with enzyme replacement therapy. For example, 89% of the infantile Pompe disease subject developed detectable IgG antibodies against the therapeutic protein rhGAA glucosidase–alpha. A subset of these subjects shown developed high sustained antibody titers (Stenger et al. 2015). Similarly, a safety and efficacy study of elosulphase for the treatment of Morquio A syndrome showed that ADA was positive in patients treated with ERT. But the degree of immunogenicity was different in different patient cohorts. The study also reported the positive NAb that inhibits the binding of the therapeutic protein to CI-M6PR in vitro, and thus interfering cellular uptake of the therapeutic enzyme. Among 114 patients enrolled for the study, above 80% of the patients were positive for NAb and <10% of the patients were positive for elosulphase alfa specific IgE (Schweighardt et al, 2015).

In contrast, the safety and efficacy study of Sebelipase-alpha treatment in lysosomal acid lipases deficiency showed a lower frequency of ADA. In this phase 3 clinical trial, 5 of 35 patients treated with Sebelipase-alpha have developed immunogenicity during 20 weeks regimen. In ADA positive patients, titers were generally low and unsustained, and the development of antidrug antibody did not have any effect on safety or efficacy variables. (Burton et al, 2015, NMEJ). These patients may possibly have decreased immune cell development and maturation and thus immune tolerance to these exogenous enzymes. The hypothesis is further supported by the LAL deficient mice with an abnormal organization of thymus and spleen and impaired T-cell development. (Peng et al, 2010)

Bioengineering process for manufacturing therapeutic protein includes a selection of appropriate cell lines, genetic fusion, post-translational modifications, conjugation, etc. that contribute to the complexity and heterogeneity of bioengineered products. Velaglucerase, an enzyme replacement therapy developed for the treatment of Gaucher disease- an inherited metabolic disease characterized by the deficiency of the lysosomal enzyme β-glucocerebrosidase. The administration of velaglucerase alfa produced lower frequency (4 out of 225 patients) of anti-drug antibody against the velaglucerase alfa. Among four anti-drug antibody-positive subjects; two were positive for neutralizing antibody but the neutralizing antibodies were not correlated changes with the endpoint biomarkers or any infusion-related adverse events. In contrast, Imiglucerase similar to ERT for Gaucher disease when administered to the subjects, has to develop immunogenicity at a higher incidence (15%). The Velaglucerase is produced in a human cell and it has an identical amino acid sequence to the naturally occurring. Imiglucerase is bioengineered from non-human mammalian cell lines have considerably different glycosylation pattern. The higher incidence of immunogenicity was observed in Imiglucerase treated patients compared to velaglucerase treated patients (Pastores et al, 2016) but different methods were used for assessing that limits direct comparison.

Risk-based approach for evaluation of Immunogenicity

A risk is defined as the product of probability and consequences. Therefore, risk-based strategies for immunogenicity evaluation should include factors that influence the unwanted immune response and the correlation to the severity of any clinical consequences. The initial challenge to adopt this strategy is defining the risk of the protein therapeutic product itself.

The risk should be defined based on the nature of the therapeutic drug, mechanism of action and toxicity and occurrence of unwanted consequences. The previously conducted non-human exploratory research; non-clinical safety and efficacy studies can provide the understanding of tissue distribution; toxicity; possible immunogenicity and clinical consequences. While defining risk, it should be evaluated if these clinical consequences can be prevented, measured accurately, and/or treated medically. For example, the protein therapeutics that mimic endogenous circulating proteins such as erythropoietin, interferon-gamma should be categorized into a high-risk category.
These classes of protein therapeutics have shown to cause various unwanted events including infusion reaction, possible stimulation of endogenous processes crosslinking with ADA (super-agonist), loss of efficacy and sequestration, and deficiency of an endogenous protein (deficiency syndrome).

Based on the potential risk identified and available measure to monitor and mitigate that risk, the testing program for immunogenicity should be designed. Regulatory agencies recommend that the risk, incidence, and consequences of immunogenicity should be evaluated on a case-by-case approach and with appropriate clinical trials. Furthermore, the regulatory authorities also demand a thorough risk identification, justified immunogenicity testing program that takes full account of the nature of the product along with its intended use.
(EMA 2012) The regulatory agencies recommend designing and implementing the risk-based bioanalytical testing approach, however, there is no prescribed method for risk determination. The definition for risk classification may vary across the industries but several consensus variables are considered to anticipate the ADA incidence and ADA mediated consequences. The classification of risks may not be universal for every protein therapeutics but they allow discretion to the extent of bioanalytical assessment during the development of such drugs.

Immunogenicity Risk Stratification
The therapeutic proteins can be categorized as high, medium, and low-risk classes based on the nature of the therapeutic drug. For example, the likelihood of immunogenicity is considered lower if the therapeutic protein consists solely of human sequences, the drug is highly purified, and administered intravenously in a single dose. In contrast, therapeutic proteins of non-human origin, product impurities, and subcutaneous administration (in comparison to intravenous administration) would usually pose a higher risk. Therefore, the regulatory authorities require the ADA response to be evaluated and recommend that immunogenicity is approached from a safety perspective, such that the higher the potential of immunogenicity to adversely affect the patient’s health, the more diligently immunogenicity should be examined. The stratification of risk level based “fit-for-purpose” bioanalytical scheme should ensure the better prediction of immunogenicity, the severity of clinical consequence based on the availability of bioanalytical methods for its detection.