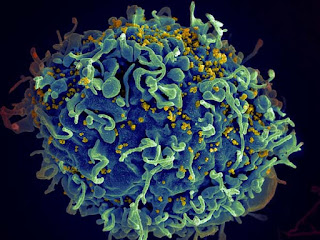 1) There are two types of HIV (Human immunodeficiency virus) viruses- HIV 1 & HIV 2. HIV 1 virus is found worldwide.
HIV 2 (a less pathogenic than HIV 1) is mainly found in which part of the world?
a) Asia
b) West Africa
c) Northern Europe
b) North America

2) Which of the following is an important molecule present in the outer membrane of HIV that helps the virus to enter the host cell and cause infection?
a) Polysaccharides
b) Glycoproteins
c) Proteins
d) Lipopolysaccharides

3) Select all the incorrect options given below for the common route of transmission of HIV from one person to another?
a) Unprotected sexual contact with an infected person
b) From infected mother to the fetus
c) From the mosquito bite
d) Exposure to contaminated blood and blood products
e) Using and sharing the same swimming pool

4) HIV belongs to which of the following genus member of the virus?
a) Ortho myxovirus
b) Retrovirus
c) Parvovirus
d) Reovirus

5) All of the following statements regarding HIV infection in human is true, EXCEPT?
a) Person once infected will remain infected for life if untreated
b) Monocytes and macrophages are the major reservoirs of the virus
c) There are mainly 3 stages of the HIV infection with AIDS being the most severe stage
d) The possible symptoms are fever, chills, fatigue, and mouth ulcers in an early stage of the infection
e)  Medicines are available for the complete cure of the chronic stage of the HIV infections

6) Which of the following enzyme is required for the viral replication process and plays a critical role in the pathogenesis of HIV infection?
a) RNA polymerase
b) DNA polymerase
c) RNA polymerase II
d) Reverse transcriptase

7) The envelope protein gp120 (Glycoprotein 120) is required for the attachment of the HIV virus to CD 4 receptors of target host cells.
Identify the immune cells that consist of CD 4 receptors:
a) T helper cells
b) Monocytes
c) Macrophages
d) Dendritic cells

9) Which of the following is an important HIV antigen in determining the early detection of HIV infection?
a) p24
b) gp120
c) Pol gene
d) Gp120

10)Which of the following bacterial infections is predominant in chronic HIV-infected patients or AIDS?
a) Pneumocystis carinii pneumonia
b) Tuberculosis
c) Candidiasis
d) Toxoplasmosis

12) Highly active antiretroviral therapy (HAART) combines protease inhibitor class drugs like indinavir and saquinavir and other drugs prescribed for HIV infection.
What is the role of these drugs in the prevention of disease?
a) Inhibitors of the enzyme protease
b) Inhibits viral replication and viral load
c) Prevents the interaction between the virus and the coreceptor
d) All of the above

13) All of the following are examples of clinically important specimens that are used for the laboratory diagnosis of HIV infection, EXCEPT?
a) Blood
b) Saliva with the presence of blood
c) Genital secretions
d) Urine with no presence of blood

14) Which of the following drug have shown significant results in reducing the transmission of HIV infection from a pregnant mother to a baby?
a) Acyclovir
b) Zidovudine
c) Ceftriaxone
d) None of the above

15) All of the following are the effective current preventive methods for HIV infection, EXCEPT?
a) Safe and protected sex
b) Use of available vaccines
c) Use of sterile injection needles
d) Safe blood transfusion method
16) It is estimated that millions of people live with HIV positive since the disease first occurred in humans.
Which of the following race of people die in increasing numbers in the USA each year according to the data collected by healthcare centers in the country?
a)  African Americans
b) Hispanics
c) Chinese
d) White Americans
17) A 45 year old man is diagnosed with AIDS, he was living with HIV for more than 5 years.
Which of the following statements is true regarding the diagnosis of the disease?
a) The CD4+ count is less than 200 cells/mm3
b) It occurs at the early stage of the HIV infection
c) The person with AIDS can live up to 10 years
d) The virus is usually in a dormant state during this stage
18) Prenatal HIV testing is one of the important blood tests recommended to reduce and prevent the transmission of the infection in newborns from HIV.
According to data published by UNICEF which of the following countries have an increasing number of babies diagnosed with HIV positive from 2010 to 2020?
a) India
b) Bangladesh
c) Africa
d) China
e) USA
19) Name the possible source of the transmission of HIV in humans that is believed to have first occurred in Africa
a) A duck
b) A pig
c) A cow
d) A chimpanzee
20) Select all the opportunistic infections which are common in the HIV/AIDS
a) Candidiasis
b) Toxoplasmosis
c) Meningitis
d) Pneumonia
Multiple Choice Answers:
1- b) West Africa
2- b) Glycoprotein
3- c) From the mosquito bite, (e) Using and sharing the same swimming pool
4- b) Retrovirus
5- d) Medicines are available for the complete cure of the chronic stage of the HIV infections
6- d) Reverse transcriptase
7- a) T helper cells
8- b) CCR5
9- a) p24
10- b) Tuberculosis
11- c) 1981
12- b) Inhibits viral replication and viral load
13- d) Urine with no presence of blood
14- b) Zidovudine
15- b) Use of available vaccines
16- a) African Americans
17- a)
18-c) Africa
19-d) A chimpanzee
20-a, b, c, and d
AIDS virus HIV HIV/AIDS prevention MEDICAL MICROBIOLOGY MULTIPLE CHOICE QUESTIONS sexually transmitted diseases