1) A watery stool sample was collected from the 5 year old boy who is suffering from diarrhea for 2 days. After the incubation in high pH media containing NaCl, smooth and round colonies appeared. Gram-negative, motile, comma-shaped bacteria were observed after the microscopic examination. Name the possible bacteria.
a) Aeromonas spp
b) E.coli
c) Helicobacter pylori
d) Vibrio cholerae


3)What is the most common food that causes foodborne gastroenteritis by Vibrio parahaemolyticus?
a) Chicken
b) Fish
c) Oysters
d) Rice

4) Which of the following statements is/are not correct about Aeromonas spp and Plesiomonas spp?
a) Both are oxidase-positive
b) They can be found in freshwater and soil
c) They are gram-negative rods
d) Grow well on TCBS (thiosulphate citrate bile salt) media

7) What are not the growth characteristics of Campylobacter spp?
Select from all the options given below.
a) Oxidase and catalase positive
b) Produce H2S
c) Ferment carbohydrates
d) Have darting motility

8) Helicobacter pylori is associated with all of the following, EXCEPT?
a) Malt lymphoma
b) Gastric carcinoma
c) Peptic ulcer
d) Burkitt lymphoma

9) Which of the following virulence factors may be associated with the pathogenesis of infection caused by Helicobacter pylori?
a) Flagella
b) Lipopolysaccharides
c) Exotoxins
d) Endotoxins

10) Which one of these is not the common laboratory test for the diagnosis and identification of Helicobacter pylori?
a) Biopsy test
b) Urease breath test
c) Stool antigen test
d) Urine test

11) Which of the following biotypes of Vibrio cholerae is prevalent in developing countries?
a) EL Tor
b) Classic
c) Biotype 0139
d) Biotype 139

12) Aeromonas hydrophila mostly causes infections to fish and amphibians and is less pathogenic to humans, mostly causing gastroenteritis in humans.
Name the other common human infection associated with the bacteria.
a) Peptic ulcer
b) Cellulitis
c) Asthma
d) Gastritis

13) Helicobacter pylori infection is most prevalent in developing countries.
Which of the following age range are found more susceptible to the disease?
a) 10 to 30
b) 30 to 50
c) 60 and above
d) Infant

14) Vibrio vulnificus and V. parahaemolyticus are both gram-negative, motile bacteria that are mostly found in warm coastal areas.
What is the common source of transmission of infection in humans?
a) Water
b) Oysters
c) Shellfish
d) All of the above

15) …...........................is less likely to cause gastroenteritis or diarrheal disease in humans.
a) Vibrio spp
b) Salmonella spp
c) Plesiomonas spp
d) Campylobacter spp
16) Which of the following bacteria is commonly associated with more than 5% of gastroenteritis cases each year in the USA?
a) Campylobacter jejuni
b) Campylobacter enteritis
c) Helicobacter pylori
d) Vibrio cholerae
17) Select all the possible risk factors that are associated with H.pylori infections
a) Continuous consumption of contaminated water
b) Living in a rural area with a crowded population
c) Person who has high blood pressure
d) People who live in warmer regions
18) All of the following are the general symptoms of cholera infections, except?
a) Diarrhea
b) Dehydration
c) Vomiting
d) High-grade fever
19) Which of the following is the most commonly used easy and effective method for the treatment of cholera symptoms in developing countries like India, Nepal, and Bangladesh?
a) Continuous oral rehydration with electrolytes
b) Intake of omeprazole medication after the onset of cholera infection
c) Vaccination method
20) In 2022 outbreaks of cholera infections have occurred in different parts of the world such as India, Nepal, Pakistan, and some parts of Africa.
What precautions should be followed while traveling to cholera endemic regions?
Select all the correct answers:
a)Drinking boiled water or bottled water
b)Disinfection of water by using chlorine and filter
c)Frequent hand washing with soap and water
d)Eat only foods that are served hot and fresh
Multiple Choice Answers Review
1-d) Vibrio cholera
2-b) Acute watery diarrhea resembling rice water
3-c) Oysters
4-d) Grow well on TCBS (thiosulphate citrate bile salt) media
5-b) Guillain-Barre syndrome
6-b) An atmosphere of reduced O2 (5%) with added CO2 (10%)
7- c) Ferment carbohydrates
8-d) Burkitt lymphoma
9-d) Endotoxins
10-d) Urine test
11- a) EL Tor
12-b) Cellulitis
13-c) 60 and above
14-d) All of the above
15-c) Plesiomonas spp
16-b) C. enteritis
17- a), b) and d)
18- d) High grade fever
19-a)Continuous oral rehydration with electrolytes
20-a), b), c), and d) 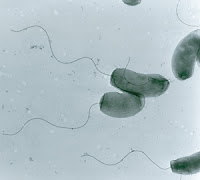