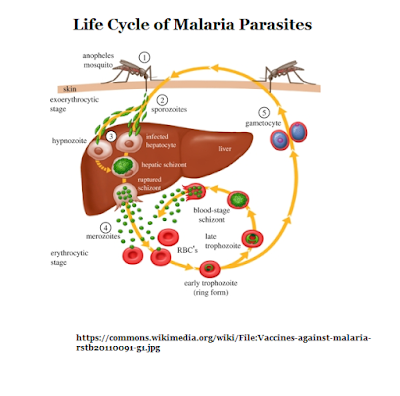 The four most important and widely used drugs for the treatment of malaria:
1.Chloroquine and Hydroxychloroquine
2. Quinine
3. Primaquine
4. Antifolates

Clinical Indication
- Chloroquine is mostly effective against all four types of malaria (except chloroquine-resistant P falciparum)
- Hydroxychloroquine is the analog of a chloroquine
- Used in the treatment of acute malaria
- Malaria prophylaxis
- Rheumatoid arthritis or systemic lupus erythematosus
Mechanism of Action
- Chloroquine is effective during an intraerythrocytic stage of the parasite
- Chloroquine concentrates into the parasite-infected erythrocytes and enters the food vacuole of the parasite by an ion-trapping mechanism
- Mechanism of action may include
- intercalation with DNA, inhibition of heme polymerase
- interaction with Ca++-calmodulin mediated mechanism
- inhibit peptide formation and phospholipases leading to parasite death
Absorption, Metabolism, and Excretion
- Rapidly absorbed from the intestine
- approximately 50% bound to plasma proteins
- about 70% of a dose is excreted unchanged in the urine
- half live is 120 hours
Toxicity
- mild headache, visual disturbances, gastrointestinal upsets & pruritus are observed during short term therapy
- After prolonged therapy, retinopathy (bulls-eye macula), lichenoid skin eruption, bleaching of hearing, etc are observed
Drug Interaction
- Chloroquine and quinine are antagonistic and should not be used in combination

Clinical Indications
- Quinine is the main alkaloid of cinchona bark
- the mechanism for anti-malarial activity remains unclear
- drug of choice in the treatment of an acute attack of falciparum malaria where the parasite is known to be resistant to chloroquine
- may be given intravenously and then orally when patients improve
- Doxycycline or clindamycin may be used as combination therapy with quinine
Absorption, Metabolism, and Excretion
- Quinine is almost completely absorbed in the upper part of the small intestine
- peaks after 1-3 hours of ingestion
- half live is approximately 10 hours
- metabolized in the liver (95%) to inactive hydroxy derivatives
- approximately 5% is excreted in urine as an unchanged drug
Toxicity
- Cinochonism
- Abdominal pain and diarrhea
- Rashes, fever, renal failure, hemolytic anemia, thrombocytopenia, etc.
3. Primaquine
Clinical Indication
- used to eradicate hepatic form of P vivax or P malariae after standard chloroquine therapy
- may be used prophylactically with chloroquine
Mechanism of action
- inhibits the electron transport chain in mitochondria (structurally similar to coenzyme Q) of parasite
Absorption, Metabolism, and Excretion
-Primaquine is rapidly absorbed from the gastrointestinal tract
- not bound to tissues
- rapidly metabolized and the metabolites may be pharmacologically active as the parent compound
- peaks after 4 - 6 hours after ingestion
- short half-life and almost completely eliminated from the body by 24 hours
Toxicity
- Primaquine can cause lethal hemolysis in individuals with glucose-6-phosphate dehydrogenase deficiency
- higher dose or prolonged exposure can cause
- gastrointestinal distress nausea
- nausea
- headache
- pruritus
- leukopenia

- inhibit folate biosynthesis at all stages of parasite life cycles

- serve as a competitive inhibitor of the malarial dihydrofolate reductase