HOPE-B Pivotal Phase 3 Clinical Studies : Trial of AMT-061 in Severe or Moderately Severe Hemophilia B Patients (NCT03569891)
This is an open-label, single-dose, multi-center, multinational trial to demonstrate the efficacy of AMT-061 and to further describe its safety profile.
The study drug is identified as AAV5-hFIXco-Padua (AMT- 061). AMT-061 is a recombinant adeno-associated viral vector of serotype 5 (AAV5) containing the Padua variant of a codon-optimized human FIX complementary deoxyribonucleic acid (cDNA) under the control of a liver-specific promoter. The pharmaceutical form of AMT-061 is a solution for intravenous infusion administered at a dose of 2 x 10^13 gc/kg.
Subjects will receive a single infusion of AAV5-hFIXco-Padua (AMT- 061) at baseline. After study drug administration (post study drug), subjects will be monitored for tolerance to the study drug and detection of potential immediate AEs at the clinical trial site for a few hours after dosing.
Primary Outcome Measures:
Secondary Outcome Measures:
Demographics of Study Population From Phase III HOPE B Clinical Study
Patients in the Phase III HOPE-B clinical study were initially enrolled into a prospective, observational lead-in period of at least six months during which bleeding events and FIX replacement therapy usage were monitored. All patients required prophylactic routine FIX replacement prior to entering the clinical trial.
More than 80 percent of the 54 patients treated in the open-label study had severe hemophilia with endogenous FIX activity at ≤1%. Forty-three percent of patients in the study had NAbs to AAV5 up to a maximum titer of over 3,200. Fifty-four patients reported 123 bleeds during the lead-in phase of the study, even while they remained on prophylactic replacement therapy.
Efficacy Endpoint 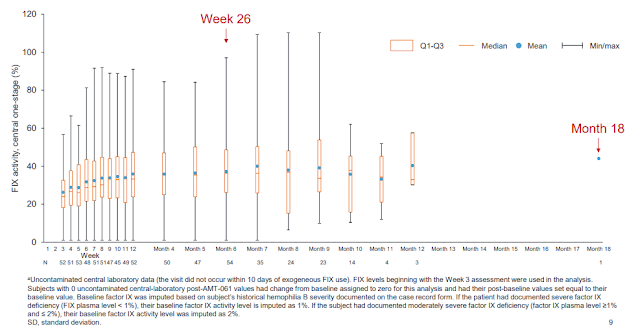 Results from Phase IIb Study Showed Durable Expression of Factor IX Up to Two Years and Reduction of Prophylactic FIX infusion
The Phase IIb study of etranacogene dezaparvovec is an open-label, single-dose, single-arm, multi-center trial being conducted in the United States. Three patients with severe hemophilia (endogenous Factor IX (FIX) activity less than or equal to one percent) were enrolled in the study and received a single intravenous infusion of 2x10^13 gc/kg.
A two-year follow-up data showed that all three patients have sustained FIX activity at therapeutic levels after the one-time administration of etranacogene dezaparvovec. Mean FIX activity for the three patients at two years after administration was 44.2% of normal (compared to 41% of normal at 52 weeks), with the first patient achieving FIX activity of 44.7% of normal, the second patient achieving FIX activity of 51.6% of normal and the third patient achieving FIX activity of 36.3% of normal.
At two years after dosing, two of the three participants remain free from bleeds and use of FIX replacement therapy. A single bleed has been reported in one participant, who has used a total of two FIX infusions (excluding surgery). All patients have remained free of prophylaxis in the two years since receiving etranacogene dezaparvovec.
Biotechnology