on December 07, 2021
REPATHA (evolocumab) injection, for subcutaneous use 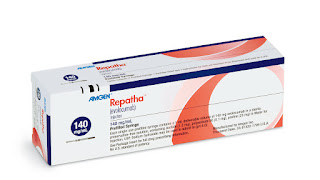 Distribution
Following a single 420 mg intravenous dose, the mean (SD) steady-state volume of distribution was estimated to be 3.3 (0.5) L.
Metabolism and Elimination Two elimination phases were observed for REPATHA. At low concentrations, the elimination is predominately through saturable binding to the target (PCSK9), while at higher concentrations the elimination of REPATHA is largely through a non-saturable proteolytic pathway. REPATHA was estimated to have an effective half-life of 11 to 17 days.
Initial U.S. Approval: 2015

WARNINGS AND PRECAUTIONS
Allergic Reactions: Rash and urticaria have occurred. If signs or symptoms of serious allergic reactions occur, discontinue treatment with REPATHA, treat according to the standard of care, and monitor until signs and symptoms resolve.