Immunology: MCQ on B cell Proliferation and Maturation

on October 18, 2022
Multiple Choice Question on B cell Proliferation and Maturation (Immunology)

1) The lymphoid stem cells commit to B cell lineage and differentiate into pro-B cells in the bone marrow.
Which of the cell surface marker is expressed in pro-B cells?
a) CD25
b) CD25R
c) CD45
d) CD45R

2) Stromal cells present in the bone marrow are required for the proliferation and survival of B cells. Which of the following is the function of stromal cells?
a) They interact with pro B cells via VCAM-1 ligand on the stromal cells.
b) Stromal cells secrete IL-7 that induces the pro-B cell to mature into pre-B cells.
c) Both of the above
d) None of the above


3) During the B cell maturation, which of the following stage expresses a surrogate light chain complexed with the heavy chain?
a) Pro-B cell
b) Pre-B cell
c) Immature B cell
d) Mature B cell

4) Which of the following cell surface marker is not expressed throughout the B cell maturation process from Pro B cell to Mature B cell?
a) CD19
b) Igα/Igβ
c) CD24
d) IgD/IgM

6) B1 B cells are self-renewing B cell subsets.
Which of the following is true regarding B1 B cells?
a) B1 B cells compose 95% of the total B cell population
b) B1 B cells express numerous IgD molecules in their cell surface
c) CD5 is an indispensable component of the B1 lineage
d) B1 population responds poorly to carbohydrate antigens

7) Thymus-independent antigens activate B cells without the help of T-helper cells.
These molecules include;
a) Lipids
b) Lipopolysaccharides
c) Polysaccharides
d) Proteins

9) Which of the following is not true regarding thymus-dependent (TD) antigens?
a) Induce isotype switching
b) Induce affinity maturation
c) Possess immunological memory
d) Always induce polyclonal activation of B cells

12) Which of the following cell surface marker constitutively expressed on B cells deliver a negative signal for B cell activations?
a) CD22
b) CD40
c) Igα
d) Igβ

13) A patient presented with a history of recurrent respiratory tract infection and exhibited a reduced concentration of all classes of immunoglobulins. The genetic testing shows a mutation of the RAG1 & RAG2 genes.
What is the function of RAG1 and RAG2 proteins?
a) Signal B cell activation
b) Rearrange heavy chains of immunoglobulins
c) Inducing Affinity maturation
d) Induce Isotype switching

14) Omenn syndrome is characterized by the presence of pruritic skin, fever, lymphadenopathy, anemia, and eosinophilia.
Which of the following condition may present as Omenn syndrome?
a) RAG gene deficiency
b) X-linked CD40 ligand deficiency
c) CD40 deficiency
d) None of the above

15) A patient visited a hospital with recurrent sinopulmonary infection. The laboratory evaluation showed a marked deficiency of circulating B lymphocytes and decreased immunoglobulin levels.
The genetic testing showed the mutation of brk (breast tumor kinase)gene.
What is the function of brk gene?
a) Brk is involved in isotype class switching
b) Brk is a tyrosine kinase that functions BCR signaling pathway
c) Brk is involved in affinity maturation
d) All of the above 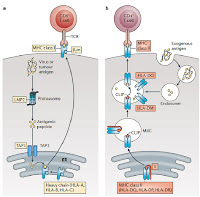