1) According to ........................ theory, an individual lymphocyte expresses a membrane receptor that is unique to each antigen. The binding of the antigen to specific receptor provoke an immune response against that specific antigen.
a) Selective theory
b) Instructional theory
c) Clonal selection theory
d) None of Above

2) Immunity is the defense mechanism of the body that protect against foreign pathogens. The immunity can be classified into innate immunity and acquired immunity. Which the following is NOT true regarding innate immunity?
a) Broadly specific against the foreign antigen
b) Exist prior to the exposure o the antigens
c) Have memory cells
d) All of the above


3) Which of the following are the characteristics of acquired immunity?
a) Diversity
b) Memory
c) Specific
d) All of the above

4) Which of the following is not an example of innate immunity?
a) Phagocytosis
b) Antibodies
c) Interferon
d) Mucus membrane

6) Lipopolysaccharides present in the cell membrane of gram-negative bacteria are recognized by .................... and elicit an inflammatory immune response
a) Phagocytosis
b) Antibodies
c) Mucus lining
d) Toll-Like receptors (TLR-2)

7) The cardinal signs of inflammation are rubor (redness), tumor (swelling), calor (heat) and dolor (pain). Which of the following is the characteristic feature of inflammation response?
a) Vasodilation
b) Increased capillary permeability
c) Recruitment of phagocytosis
d) All of the above


9) The antigen presenting cells (APCs) plays a crucial role in antibody-mediated and cell-mediated immune response. Which of the following is not the characteristic feature of APCs?
a) APCs internalize and degrade antigens
b) APCs present antigens to the T-cells via MHC-II molecules
c) APCs provide a co-stimulatory signal for T-cell activation
d) Excess co-stimulatory signals from APCs lead to hyperactivation of an immune response.


10) Which of the following is not the class of T cells?
a) T-helper cells
b) T-cytotoxic cells
c) T-suppressor cells
d) T-activator cells

11) Which of the following cells produces antibodies?
a) T-cells
b) Plasma cells
c) B cells
d) Memory cells

13) Antibody functions as the effector of the humoral response by antigen binding and neutralizing it. The antigen can be eliminated by
a) Facilitating the antibodies update by phagocytes
b) Activating complements and inducing cell lysis
c) Preventing the binding and host cell attachment
d) All of the above

14) Which of the following immune cells are not derived from lymphoid progenitor cells?
a) B-cells
b) T-cells
c) Natural Killer cells
d) Neutrophils

16) The different lineage of the lymphocytes can be distinguished by characterizing the expression of their membrane molecules called the cluster of differentiation (CD). Which of the following CD is only found in B-cells?
a) CD-4
b) CD-8
c) CD-32
d) CD-45

17) Which of the following CD molecule is present in both cell types of T cells (Th and Tc) and acts as a receptor for the co-stimulatory signal from APCs?
a) CD2
b) CD4
c) CD28
d) CD45

18) Which of the following CD molecule is a signaling transduction molecule present in lymphoid lineage cells such as T-cell, B-cells, and NK
a) CD2
b) CD4
c) CD28
d) CD45

20) The tissue-specific macrophage-like tissues are essential for phagocytosis of the antigens. Which of the following cells are present in the kidney?
a) Alveolar macrophages
b) Kuffer cells
c) Histiocytes
d) Mesangial cells
21) Immunogens are the antigens that can evoke an immune response. Which of the following is not an immunogen?
a) Protein
b) Lipopolysaccharides
c) Polysaccharides
d) Hapten

22) The degree of immunogenicity generally depends on the degree of foreignness. Which of the following protein are highly conserved among species and have little immunogenicity when injected to cross-species?
a) Bovine Serum Albumin
b) Thyroglobulin
c) Insulin
d) Collagen

23) Although the degree of immunogenicity generally depends on the degree of foreignness, certain antigens/tissues are immunogenic against self-antigens. The example includes
a) Kidney
b) Cornea
c) Heart
d) Collagen

24) Which of the properties of an antigen makes it poorly immunogenic?
a) Distant species origin
b) High molecular weight proteins
c) Heteropolymers
d) Homopolymers

25) B-cells have cell surface antibodies that serve as the recognition molecule, and T cell recognizes when these antigens are presented via MHC molecules. Some glycolipids are also recognized by T-cell when presented by a non-MHC molecule known as
a) CD1
b) CD2
c) CD4
d) CD8

27) The epitopes that are recognized by B-cells are known as B-cell epitopes. The following is a true statement regarding B-cell epitope
a) they are generally hydrophilic amino acids present on the surface
b) they contain both sequential and conformational epitopes
c) they tend to present on the flexible region of the antigens
d) All of the above

29) The following congenital defect of thymus development lead to T-cell deficiency:
a) Graves disease
b) DeGeorge's syndrome
c) Anaphylaxis
d) All of the above 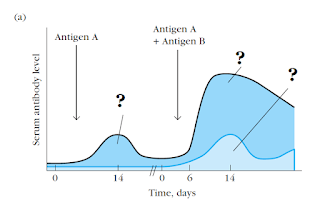