Glutamate and Glutamine are nutritionally non-essential amino acids that are the building block of proteins and, the precursor for the synthesis of other nonessential amino acids, urea, and neurotransmitters. Glutamine also serves as a co-substrate for the formation of asparagine. The glutamate and glutamine synthesis reaction uniquely incorporates free ammonium ions and is important for ammonia metabolism and detoxification.

Metabolism of Glutamine and Glutamine 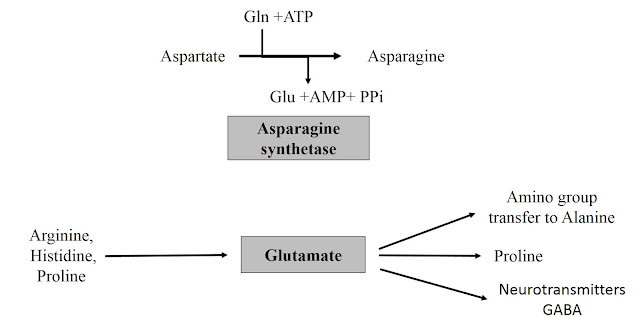 Metabolism of Serine and Glycine

3) Glutamate and Glutamine are critical entry points for free ammonia to enter the metabolic pathway. Which of the following pathways glutamate metabolism is regulated by allosteric inhibitors such as alanine, glycine, and carbamoyl phosphate?
a) Glutamate synthase
b) Glutamate synthetase
c) Glutamate dehydrogenase
d) Glutamate deoxygenase

4) N-acetyl Glutamate is an activator of urea synthesis and is formed from condensation glutamate and acetyl CoA.
Which of the following enzyme catalyzes this reaction?
a) Arginosuccinate synthetase
b) Carbamoyl phosphate synthetase
c) N-Acetyl glutamate synthase
d) Glutaminase

5) Hydroxyproline and hydroxylysine are formed by hydroxylation of proline and lysine; the reaction is catalyzed by prolyl and lysyl hydroxylase.
Which of the following serve as coenzyme?
a) Biotin
b) Thiamine
c) Ascorbate
d) Niacin

7) 3-phosphoglycerate is the precursor for all of the following amino acids, EXCEPT
a) Serine
b) Glycine
c) Alanine
d) Cysteine

8) The conversion of serine to glycine is catalyzed by an enzyme serine hydroxymethyltransferase.
The co-substrate required for this reaction is:
a) Biotin
b) Pyridoxal Phosphate
c) Tetrahydrobiopterin
d) Tetrahydrofolate

9) Alpha-ketoglutarate is the precursor for all the following amino acids, except?
a) Proline
b) Arginine
c) Glutamine
d) Asparagine


10) Which one of the following statements concerning a one-week-old male infant with undetected classic phenylketonuria is correct?
a) Tyrosine is a non-essential amino acid for the infant
b) High levels of phenylpyruvate appear in the urine
c) A diet devoid of phenylalanine should be initiated immediately
d) Therapy must begin within the first year of life

11) Maple syrup disease is a disorder due to a deficiency of pathway that degrades:
a) Tyrosine
b) Tryptophan
c) Leucine
d) Methionine

15) Which of the following amino acids have an important role in the transport of amino groups from peripheral tissues to the liver?
a) Serine
b) Methionine
c) Glutamine
d) Arginine

16) The following metabolite is excreted via urine to maintain the nitrogen balance, except:
a) Amino acids
b) Creatinine
c) Urea
d) Ammonia