on December 16, 2017
Adeno associated virus (AAV) is a naturally occurring single-stranded DNA virus that belongs to the parvovirus family. The commonly used viral vectors for gene therapy are derived from naturally occurring AAVs. These vectors are genetically modified/engineered that do not contain and devoid of genes encoding viral proteins critical for their viral replication.
The viral gene is replaced with the transgene of interest is packaged into the AAV viral capsid and administration to humans. The AAV viral vectors enable attachment and entry of transgene into the target cells. Once inside the cell nucleus, the transgene remains in the episomal form and expresses the gene of interest. Although recent evidence has shown that long-term stable expression of these transgenes can be achieved in pre-clinical models and humans, there is inherent immunogenicity risk associated with adeno-associated vectors which include:
-Pre-existing antibodies and T cell response against viral vectors
-Neutralizing antibodies generated against capsid proteins of the adeno-associated virus vector
-T cell-mediated response against AAV vector capsid
-Neutralizing antibodies and T cell-mediated response against transgenes 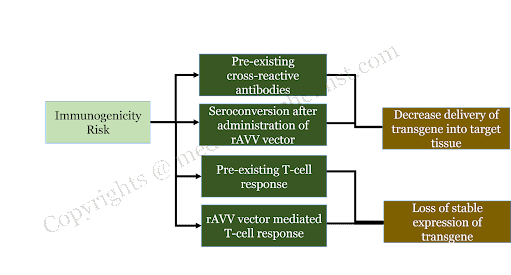 
Pre-existing antibodies and T cell response against viral vectors:
The high prevalence of pre-existing binding and neutralizing antibodies against adeno-associated viral vectors are observed in clinical studies. These are plausibly cross-reactive antibodies generated against wild-type adeno-associated viruses. Seroprevalence studies have shown that anti-AAV2 neutralizing antibodies had the highest prevalence followed by neutralizing antibodies against anti-AVV1,  AAV7, AAV8, and AAV9. The seroprevalence of antibody varies with geographical regions and direct comparison of prevalence studies is limited by different detection methods and sensitivity.
In the case of T cell-mediated immunity, the stimulation of a maximal adaptive immune response requires co-stimulation with the helper virus leading to CD4+ and CD8+ T cells directed to the antigens of the helper virus and of the adeno-associated virus are formed, and a small pool of memory T cells are maintained throughout life.
Neutralizing antibodies generated against capsid proteins of adeno-associated virus vector:
The AAV vectors are genetically modified to ensure that it does not integrate into the host genome. This has decreased the risk of random integration, gene disruption, or cancer. But the capsid proteins are intact viral proteins that are recognized by the host immune cells activating immune response and seroconversion. The gene therapy involves a single large dosage of gene-containing vector particles which may provoke a rapid innate and adaptive immune response.
The immunogenicity and antibody response to the viral capsid can vary from individual to individual and the mechanism of this variation is largely unknown. But the neutralizing antibodies generated against these viral particles have shown to decrease viral vector delivery to the target cell by increasing the clearance of viral particles.
T cell-mediated response against AVV vector capsid:
Initially, T cell-mediated immune response was observed in hemophilia B subjected who was given an engineered AVV2 vector consisting of factor IX under a liver-derived promoter. In a study subject, approximately 4 weeks after vector infusion, the liver transaminases (alanine aminotransferase, aspartate aminotransferase) began to rise, peaking at about 6 weeks and gradually returning to normal levels over the ensuing 8 weeks without any medical intervention. Concurrently, circulating factor IX (FIX) levels also slowly declined, and by 12 weeks after vector, the infusion was decreased to pretreatment baseline. IFN-gamma enzyme-linked immunospot (ELISPOT) assays showed a response to AAV2 capsid but not transgene (factor IX). It was hypothesized that the transaminase elevation reflected the specific destruction of the transduced hepatocytes by capsid-directed CD8+ T cells.
Neutralizing antibodies and T cell-mediated response against transgenes:
The neutralizing antibodies against viral proteins may inhibit the transduction of genetically engineered viral particles into the host cells. In contrast, the neutralizing antibodies against the transgenes can have a greater risk to the host including antibody-mediated and T-cell mediated immunity. Although to date, no neutralizing antibodies and T-cell-mediated immune responses are observed, these trials are conducted in an immune-privileged organ or the inclusion of subjects that do not have pre-existing neutralizing antibodies. Results from clinical trials are concordant with results from preclinical models where immune tolerance has been observed and are mainly associated with the induction of Tregs (T regulatory cells). These results are yet to be translated into humans and a broader study should be conducted to understand the full spectrum of immune response and immune tolerance.

Conclusion:
The collective evidence suggests that seroprevalence neutralizing antibodies and T-cell mediated response against wild-type adeno-associated virus was observed and cross-reacts with capsid proteins of genetically modified viral vectors. In addition, the seroconversion and T-cell response are also prevalent in subjects infused with engineered viral vectors that can impede successful gene transfer and loss of transgenes expression. Therefore, early identification of immunogenicity risk and mitigation strategy would increase the probability of a positive outcome in clinical trials.

Future challenges:
The improvements of viral vectors, transgene itself, and understanding of immunogenicity risk have enabled the robust clinical design and positive outcomes in clinical studies. There are questions and challenges that need to be addressed. These includes
i) Designing a preclinical model to understand immunogenicity risk
ii) Inter-individual variations on immunogenicity and impact on transgene expression
iii) Treatment strategies for subjects with pre-existing immunogenicity
iv) The long-term safety risk of adeno-associated viral gene therapy
v) Long-term treatment benefits of transgenesis
vi) Strategies and potential risk if repeated administration are required

Redirecting to another URL