Why the development of new treatment paradigm is necessary?
The standard treatment for hemophilia (A and B type) is the intravenous infusion of an exogenous clotting protein more than once a week to prevent bleeding. In addition, the development of inhibitors decreases the efficacy of the exogenous replacement factor and the severe hemophilia patients do not respond to these therapies.
Therefore, the treatment for hemophilia is an unmet need and warrants the exploration of new treatment paradigm.

Till date, the primary goal of treatment of any hemophilia is to reduce the bleeding frequency and associated complications with repetitive dosing of exogenous clotting protein. The advent of gene therapy has made possible to imagine the complete correction of bleeding disease with a single dosage. Also, gene therapy can be one and done treatment for severe hemophilia patients that do not respond to the exogenous factor replacement therapy. 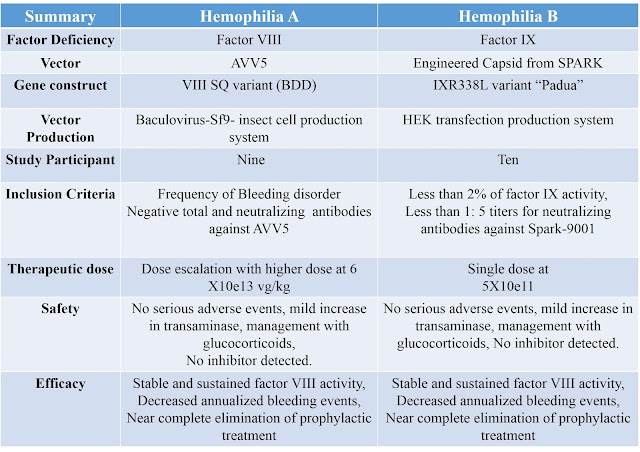 Adeno associated virus-mediated gene transfer of hVIII-SQ variant for Hemophilia A
Rangarajan et al, 2017 have shown a successful adeno-associate virus-mediated gene transfer and expression of factor VIII SQ variant in nine subjects with severe hemophilia A. In most of these patients, the decreased bleeding frequency with sustained factor VIII activity level was observed.
In these study subjects, the stabilization of hemostasis with a profound reduction in factor VIII use was observed.

Challenges with factor VIII vector design: The successful gene transfer and expression of factor VIII for hemophilia A have been challenging because of the distinct molecular and biochemical properties of human factor VIII. The full-length human factor VIII are 280kda protein and the expression are less efficient compared with other proteins of similar size. The stable expression of factor VIII is limited by unstable mRNA, interaction with the endoplasmic reticulum (ER) chaperone and the requirement for facilitated ER to Golgi transport through interaction with mannose-binding lectin (LMAN1).
The deletion of factor VIII B domain resulted in a 17-fold increase in mRNA level and a 30% increase in secreted protein. Because the B-domain is not required for factor VIII activity, the deletion of B-domain also enables an effective packaging of the genome into the viral vector. Therefore, the factor VIII SQ variant was optimized and packaged into the AVV5 vector to infuse into study subject. The gene structure is represented in the figure below:

Clinical study design and safety/efficacy outcomes:
To be eligible for enrollment into the study, the study subjects should have no history of preexisting inhibitors and no detectable immunity to the AAV5 capsid. The subject should have at least 12 bleeding event in 12 months from the date of enrollment and must be on the prophylactic treatment of recombinant factor VIII protein. In this dose escalation study, three different doses of the viral genome were infused to the study subjects. Seven subjects received 6 X 10e13 vg, one subject received 6 X10e12 and one subject received 2X 10e13. The primary efficacy goal was a factor VIII activity level at least 5IU per deciliter at 16 weeks after gene transfer. Secondary efficacy was the frequency of factor VIII use and the number of bleeding episodes.

The AVV-based gene therapy is targeted mainly to the liver, therefore, a mild asymptomatic increase in serum level of alanine transaminase is expected. Rangarajan et al, 2017 reported the mild increase in alanine transaminase activity with a persistent increase in factor VIII activity in 6/7 subjects infused with 6X 10e13 viral genome load and the absence of any other elevated liver function parameters. One out of seven subjects had declined in factor VIII level with an increased alanine transferase. The post-infusion total antibodies against AVV5 were detected but the T-cell mediated response was absent as evidenced by ELISPOT. Importantly, no inhibitors (neutralizing antibodies ) were detected in these subjects.

Rangarajan et al, 2017 reported that the higher viral genome load has shown increased factor VIII level within or above the normal reference range. In addition, the annualized bleeding rate was significantly decreased and the subjects do not require administration of recombinant VIII. The primary endpoint for efficacy factor VIII activity more than 5 IU per deciliter was reached in all seven patients with a high viral genome dose.

Adeno-associated virus-mediated gene transfer of factor IX-R338L variant for Hemophilia-B
George et al, 2017 have shown a successful adeno-associated virus-mediated gene transfer and expression of factor IX Padua variant in nine subjects with severe hemophilia A. In most of these patients, the decreased bleeding frequency with sustained factor IX activity level was observed. In these study subjects, the stabilization of hemostasis with a profound reduction in factor IX use was observed.


Challenges with factor IX vector design:
The successful gene transfer and expression of factor IX for hemophilia B have been challenging because of the short half-life in circulation or durable but suboptimal expression level requiring higher viral doses and associated immunological risk. These factors have hindered the development of appropriate gene transfer therapy. To overcome these problems, George et al included the naturally occurring variant factor IX R338L (Padua) as a gene construct for gene therapy. The factor IX Padua is a gain-of-function mutation in the catalytic domain that results in 8-12 times higher activity compared to wildtype factor IX. In addition, infusion factor IX Padua resulted in long-term expression of the transgene in a canine model. In previous clinical trials, the factor IX Padua variant was tolerated in the human subject with no inhibitor formation. George et al. 2017 designed a study to show the safety, sustained factor IX activity and efficacy with a low dose of the therapeutic vector (5 X10e11). The gene structure is represented in the figure below:

Clinical study design and safety/efficacy outcomes: The primary goal of the study was to determine the safety of infusion of the therapeutic viral load in the hemophilia B subjects. To be eligible for enrollment into the study, the study subjects should be at least 18 years and a factor XI activity of 2% or less of the normal value. The AVV-Spark100 neutralizing antibodies of 1:5 or less determined by an in vitro transduction assay.

In this phase 1-2 study, 10 men with hemophilia B received 5 X 10e11 vg/kg of AVV-factor IX R338L packaged viral particle. George et al. reported that high levels of a vector derived factor IX activity and a low incidence of a capsid-directed immune response was observed after the infusion of a therapeutic viral particle. Importantly, the T cell cell-mediated immunity against factor IX-R338L transgene was detected using interferon-gamma ELISPOT. The study reported no serious adverse events mainly no deaths, no inhibitor formation, and no excess activation of coagulation cascades. The transient mild increase in alanine transaminases was observed in two patients that may be associated with AVV related adverse event. In these subjects, the T-cell mediated immunity against viral capsid was detected using ELISPOT.

The single-dose infusion of 5X 10e11 vg/kg of viral particle resulted in a steady state factor XI with 35% (range 14 to 81) of the normal range, and therapeutic effect was observed in each subject. The annualized bleeding rate was significantly decreased and no prophylactic treatment of factor IX was required. Importantly, one study subject had hemarthrosis in baseline and gene transfer resulted in 91% less requirement of recombinant factor IX for the cessation of bleeding.

Summary and Conclusion
In summary, the promising results from these clinical studies deliver hope to patients with severe hemophilia. Long-term follow-up studies and pivotal phase 3 studies may be necessary to show the efficacy and long-term benefits. It will be not long before we see gene therapy accessible to these hemophilia patients.

Disclaimer: The products are an investigational new drug for Hemophilia A (BioMarin Pharmaceuticals Inc) and Hemophilia B (Spark Therapeutics)