on December 04, 2017
Inherited Biallelic RPE65 Mutation-Associated Retinal Dystrophy
Inherited retinal dystrophies are a group of rare blinding conditions that are associated with progressive visual dysfunction. This rare genetic disorder is classified based on the phenotype, and the mutation in any one of more than 220 different genes are causal for this rare blinding condition. Retinitis pigmentosa is the most common subgroup of inherited retinal dystrophy characterized by reduced ability to perceive light and progressive loss of visual field. RP is genetically heterogeneous, and mutations in any one of over one hundred genes can cause the phenotype.

RPE65 gene encodes all-trans-retinyl ester isomerase, an enzyme crucial to the retinoid cycle
Autosomal recessive biallelic mutations in this gene lead to the inability to regenerate 11-cis-retinal, via 11-cis-retinol, in the retinal pigment epithelial cells RPE cells. This impairs the ability of RPE cells to respond to light, which disrupts the visual cycle. In addition, the accumulation of toxic precursors leads to RPE cell death and eventually progresses to complete blindness due to the death of a photoreceptor.
Prevalence of RPE65 mutations: Biallelic mutations in the RPE65 gene has been associated with the clinical phenotype of Leber congenital amaurosis Type 2 (LCA2) and with the clinical phenotype of retinitis pigmentosa type 20 (RP20). Both LCA2 and RP20 are inherited in an autosomal recessive manner. The prevalence of LCA2 is approximately 0.74 – 1.5 per one million and accounts for approximately 1% or less of all retinal dystrophies. The estimated prevalence of RP20 is approximately 5 per one million. Role of

Human RPE65 (isomerase) Protein in the visual cycle
In humans, vision is initiated in rod and cone photoreceptors. The photosensitive entities in these cells are the visual pigments which consist of an apoprotein, opsin, and a chromophore, 11-cis retinal, which is attached to the opsin by a Schiff's base bond. Upon absorption of light by the pigments, 11-cis retinal is isomerized to all-trans-retinal, which leads to the conformational changes of opsin and subsequently activates G protein transducin, initiating vision. The all-trans-retinal is reduced to all-trans-retinol (catalyzed by enzyme all-trans-retinal dehydrogenase, transported to the retinal pigment epithelium (RPE), and converted to fatty acid all-trans-retinyl esters by lecithin/retinol acyltransferase (LRAT). The isomerase, RPE-specific 65 kDa protein (RPE65) uses an all-trans-retinyl ester as a substrate to form 11-cis-retinol (11-cis-ROL) plus a free fatty acid. Regeneration of 11-cis-retinal via a two-step process that is catalyzed in part by RPE65 completes this retinoid (visual) cycle. Efficient regeneration of 11-cis retinal, referred to as the visual retinoid cycle is critical for the regeneration of the visual pigments. The defect in RPE65 leads to incomplete visual cycle and impaired vision. 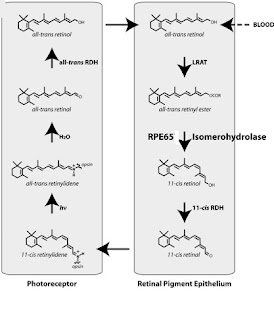 Voretogene neparvovec for gene augmentation of RPE65
Voretigene neparvovec (AAV2-hRPE65v2) is a recombinant adeno-associated virus serotype 2 (AAV2) vector consist of the gene for human retinal pigment epithelium 65 kDa protein (hRPE65) under downstream of cytomegalovirus (CMV) enhancer and chicken beta-actin (CβA) promoter. CβA is responsible for driving expression of the gene RPE65 in the retinal pigment epithelium in the subject that lacks the functional gene. The AAV2 capsid components of voretigene neparvovec facilitate cell surface binding, entry, and delivery of the vector genome packaged within the capsid to the nucleus of the cell. Once in the nucleus, the genome is uncoated and replicated by cellular DNA polymerases into a double-stranded genome, which subsequently forms the extrachromosomal of the expression cassette. The concatamer formation is the crucial step for efficient and durable expression of the hRPE65 enzyme in cells of the retina.

Vector construct and Design
For manufacturing AVV2-REP65v2, the three separate plasmids encoding the hRPE65 expression cassette, the AAV2 rep and cap sequences, and the helper virus-derived sequences required for replication of the hRPE65 expression cassette prior to packaging are co-transfection into cultured and expanded HEK cells. The transfected cells are harvested, and voretigene neparvovec is purified through multiple processing steps and is formulated as a frozen aqueous solution.

Clinical Evidence:
The phase 3 clinical trial was conducted with the following objective:
To assess the safety, tolerability, and efficacy of sequential (non-simultaneous) subretinal administration of voretigene neparvovec to each eye.

Primary Efficacy: To determine whether sequential subretinal administration of voretigene neparvovec to each eye could improve the subjects’ ability to navigate a course with obstacles. The primary efficacy analysis was based on 31 subjects in Study 301. The median MLMT score change was significantly different between the treatment and control groups (p-value=0.001 for using both eyes; p-value < 0.001 for using the first eye). The median MLMT score change of 2, using both treated eyes, for the subjects in the treatment group (n=20) was maintained throughout the 1-year follow-up period.

Immunogenicity:
Rise in antibody titer to AAV2 capsid in six subjects who had low titer at baseline, but no clear clinical correlation. Human PBMC Interferon-γ Responses to AAV2 and RPE65 by ELISPOT at BL, Days 14, 30, and 90 were positive in the subset of the patients.

Conclusion:
Based on the evidence provided, gene therapy has a beneficial outcome for the patients. During the advisory committee meeting, FDA panel experts voted unanimously and recommended for approval. The in-vivo gene therapy treatment for becomes a reality.