MCQ on Microorganisms Associated With Cancer 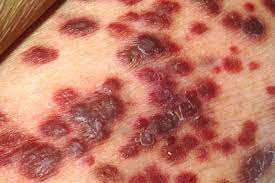 MCQ on Microorganisms Associated With Cancer

1. Epstein Barr virus is most commonly associated with all of the following types of cancers, Except?
a) Burkitt's lymphoma
b) Hodgkin's disease
c) Kaposi's sarcoma
d) Nasopharyngeal carcinoma

2. All of the following regarding the Rous sarcoma virus are correct, Except?
a) The first described oncogenic RNA virus
b) It is used as a DNA tumor virus
c) First identified from a tumor in chickens
d) It consists of the extra oncogene causing sarcoma
3. A 47 year old woman suffering from gastritis for more than 3 years and has been taking medication for gastritis, pain killers for episodes of abdominal pain. Since the diagnosis she lost more than 15 pounds and had a problem gaining weight, the symptoms got worse even with more diet restrictions. The blood and feces samples for laboratory examination were submitted and an endoscopy was also performed. A stomach ulcer was confirmed from the tests.
Which of the following microbe could be the possible pathogen that has been associated with gastrointestinal cancer mostly in developing countries?
a) Hepatitis A
b) Human papillomavirus
c) Helicobacter pylori
d) Enterococcus faecalis

4. Which of the following statement is NOT correct about the HPV (Human papillomavirus) vaccine?
a) It is routinely recommended at the ages of 11 to 13 before the exposure of virus
b) It can protect both men and women from more than 5 types of cancers
c) Two doses of vaccine is required for children under 15 years of age
d) In the USA it is given to people only age 19 and under

5. Name the following microorganism that is most commonly isolated from skin associated with cancer, it is also a part of a normal skin flora
a) Herpesvirus
b) Merkel cell polyomavirus
c) Epstein Barr virus
d) Hepatitis B and C

6. Which of the following is Not considered the common risk factor for increasing the chance of mutation in the gene and cancer in humans?
a) Tobacco uses
b) Ultraviolet sunrays
c) Frozen foods
d) High alcohol consumption

7. Which of the following is the most common virus linked to the cases of cervical cancer, and vaginal cancer in women and penile cancer in men?
a) Hepatitis C virus
b) Human immunodeficiency virus
c) Retrovirus
d) Human papillomavirus

8. A 36 year old HIV-positive man comes to the hospital with enlarged lymph nodes around the groin area, the infected area is painless but itchy. Name the most common disease the patient could be infected with
a.  Merkel cell carcinoma
b. Hodgkin disease
c. Non-Hodgkin lymphoma
d. AIDS

9. Which of the following could be the possible etiological agent associated with the above (8) question?
a) Herpesvirus
b) Human papillomavirus
c) Poxvirus
d) Adenovirus

10. According to the Centers for Disease Control and Prevention which of the following microbe is associated with the leading cause of hepatocellular carcinoma in the USA and worldwide?
a) Helicobacter pylori
b) Hepatitis B and C
c) Epstein Barr virus
d) Papillomavirus 16 and 18

11. Which of the following statements regarding the several studies based on the link between chronic oral infections and cancer is Not correct?
a) Smoking has been found as the major risk factor
b) Mainly occurs in adulthood and older ages
c) Person infected with STD
d) Adenovirus is primarily associated with oral cancer

14. All of the following DNA viruses are possible oncogenic viruses, Except?
a) Human T cell leukemia virus
b) Herpes simplex virus
c) Poxvirus
d) Hepatitis B and C virus

15. Name the most likely bacteria that have been linked to cancer in humans, and select from the options below
a) Helicobacter pylori
b) E. coli
c) Salmonella typhi
d) Plasmodium falciparum