1) Which of the following are not the common morphological characteristics of spirochetes?
a) They are gram-negative helical bacteria
b) They are motile and have periplasmic flagella (endo flagella)
c) They reproduce by transverse binary fusion
d) They are obligate aerobes

2) Which of the following subspecies of Treponema pallidum causes endemic syphilis?
a) Treponema carateum
b) Treponema endemicum
c) Treponema pertenue
d) None of the above

4) A 30 year old man infected with syphilis developed a skin lesion on his prepuce, the lesion was oval in shape and painless.
What is the specific name for this type of lesion?
a) Nodules
b) Papule
c) Eczema
d) Hard chancre

5) Epidemic Relapsing fever in humans is caused by the infected body louse which acts as a vector and is transmitted to humans.
Which of the following are the most likely spirochetes?
a) Borrelia recurrentis
b) Leptospira interrogans
c) Borrelia burgdorferi
d) Borrelia hermsii

6) The following pathogen is motile, found worldwide, and infects kidneys and liver which can lead to infectious jaundice, the bacterial serovars are transmitted to humans through contact with animals and their excreta.
Name the most likely pathogen
a) Leptospira interrogans
b) Bordetella pertusis
c) Borrelia burgdorferi
d) Enterococcus faecalis

8) Which of the following organisms is NOT commonly found as a part of normal flora in the oral cavity?
a) Streptococcus mutans
b) Borrelia buccalis
c) Spirillum minor
d) Candida albicans

10) The bacteria causing Leptospirosis are difficult to isolate from urine, blood, or CSF specimens by culture method, therefore a confirmation test should be done.
Which of the following statement is most correct in the diagnosis of the disease?
a) RPR tests for the detection of serogroup antigens from the acute or convalescent phase
b) Antibodies are tested against the serogroup antigens from the acute or convalescent phase
c) Darkfield microscopy method is done to detect the pathogen from serum samples
d) All of the above

11) The diagnosis of Lyme disease is done by two serological tests after the screening test, one with a positive confirmatory ELISA test, what is the other test?
a) Western blotting assay
b) PCR
c) Immunofluorescent assay
d) Southern blotting assay

12) Which of the following spirochetes causes skin disease primarily to individuals who have dark skin color and is transmitted by direct contact or vectors such as flies?
a) Borrelia hermsii
b) Spirillum minor
c) Treponema pallidum subspecies pertenue
d) Treponema carateum

14) Which of the following statements is not correct about 'congenital syphilis'?
a) The spirochetes are transferred from mother to fetus across the placenta
b) The early manifestations occur in children during the birth
c) Five to ten percent of infected children can develop cutaneous lesions
d) The infection can lead to stillbirth

16) Which of the following infections are transmitted through the non-sexual route caused by the Treponema spp?
a) Yaws, bejel and pinta
b) Visceral leishmaniasis
c) Shingles
d) Donovanosis
17) 'Syphilis' is caused by Treponema spp.
What is the other major disease that is caused by the bacteria?
a) Lyme disease
b) Tularemia
c) Periodontal disease
d) Infectious mononucleosis
18) Which of the following test is a simple, low-cost, and commonly used test for screening syphilis infection around the world?
a) Western blot
b) VDRL test
c) Agglutination test
d)None of the above
19)Penicillin is the drug of choice for the treatment of syphilis, but in recent years it has been found to be highly resistant.
Which of the following types of antibiotic is recommended for the group of people with early as well as late-stage syphilis who show resistance to penicillin?
a) Macrolides
b)Ceftriaxone
c) Tetracyclines
d) Fluoroquinolones
20)Endemic syphilis is mainly transmitted through nonsexual contact and has been found to be prevalent in which of the following country?
a) USA
b) Europe
c) Spain
d) South Africa 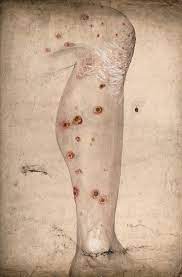