- Vosoritide is the investigational drug for the treatment of Achondroplasia
- Developed by Biomarin, and received orphan designation from FDA and EMA
- New Drug Application Under Review by FDA with Set PDUFA August 2020
- EMA validated the marketing authorization application
- Publication of positive outcome data from Phase 3 study in Lancet
Achondroplasia, the most common form of disproportionate short stature in humans, is characterized by slowing of endochondral ossification, which results in disproportionate short stature and disordered architecture in the long bones, spine, face, and base of the skull. This condition is caused by a mutation in the fibroblast growth factor receptor 3 gene (FGFR3), a negative regulator of bone growth.
Beyond disproportionate short stature, people with achondroplasia can experience serious health complications, including foramen magnum compression, sleep apnea, bowed legs, mid-face hypoplasia, permanent sway of the lower back, spinal stenosis, and recurrent ear infections. Some of these complications can result in the need for invasive surgeries such as spinal cord decompression and straightening of bowed legs. In addition, studies show increased mortality at every age.

The worldwide incidence rate of achondroplasia is about one in 25,000 live births. Vosoritide is being tested in children whose growth plates are still "open", typically those under 18 years of age. This is approximately 25% of people with achondroplasia. There is no treatment available for achondroplasia. 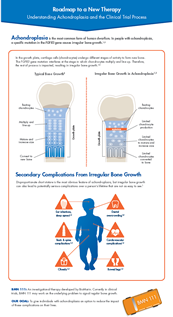 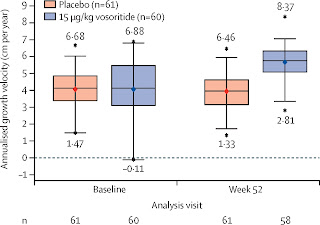