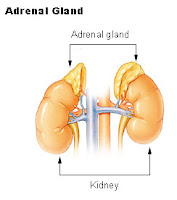 1) Which of the following adrenal regions do not produce the steroid hormones?
a) Zona glomerulosa
b) Zona fasciculata
c) Zona reticularis
d) Adrenal cortex

3) Which of the following is not the 21-carbon steroid hormones?
a) Progesterone
b) Aldosterone
c) Cortisol
d) Androstenedione

6) Glucocorticoids stimulate gluconeogenesis by which of the following mechanisms?
a) Increase protein catabolism and availability of amino acids
b) Decreased glucose utilization and insulin sensitivity in adipose tissue
c) Increased lipolysis and increase the availability of glycerol pool
d) All of the above

7) Glucocorticoids possess anti-inflammatory effects by the following mechanism, EXCEPT
a) Induce the synthesis of lipocortin
b) Inhibit the production of interleukin-2 and inhibit T cell proliferation
c) Induce the release of histamine and serotonin from mast cells
d) Decrease production of prostaglandins and leukotrienes

11) Conn Syndrome is a disease caused by an aldosterone-secreting tumor resulting in an increased aldosterone level.
Which of the following does not accurately characterize Conn syndrome?
a) Hypertension
b) Hyperkalemia
c) Metabolic alkalosis
d) Decreased renin secretion

12) Which of the following condition does not accurately characterize the congenital adrenal hyperplasia caused by 21 beta-hydroxylase deficiency?
a) Elevated 17-hydroxyprogesterone
b) Elevated Aldosterone
c) Hyponatremia
d) Hyperkalemia

14) Which of the following would be associated with parallel changes in aldosterone and cortisol secretion?
a) Addison's disease
b) Cushing's disease
c) Low sodium diet
d) Administration of a converting enzyme inhibitor

Answers
1-d) Adrenal cortex
2-c) Aldosterone
3-d) Androstenedione
4-c) ACTH inhibits the enzyme cholesterol desmolase in the adrenal cortex
5-b) The suppression of the glucocorticoid release by dexamethasone administration is suggestive of Adrenal cortical tumors
6-d) All of the above
7-c) Induce the release of histamine and serotonin from mast cells
8-c) ACTH increases the production of aldosterone
9-e) All of the above
10-a) increased cortisol, decreased ACTH, hyperglycemia, and muscle wasting
11-b) Hyperkalemia
12-b) Elevated Aldosterone
13-d) Increased plasma cortisol, decreased plasma ACTH, without hyperpigmentation
14-a) Addison's disease
15-c) Increased secretion of aldosterone
BIOCHEMISTRY cholesterol Endocrinology MULTIPLE CHOICE QUESTIONS PHYSIOLOGY