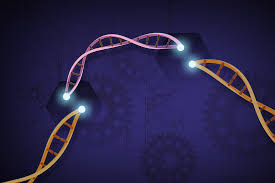 Gene editing is a genome engineering technology that allows us to make intended changes in the DNA. It includes ablating the target genes, inserting/deleting a segment of DNA to the target site, etc. CRISPR is a bacterial-derived gene-editing technology consisting of cas9 protein and guide RNA. The CRISPR technology is being explored for the curative intervention of genetic diseases including muscular dystrophy.


The recent study by Gersbach lab published, in Nature Medicine, evaluated the long-term efficacy of AAV mediated CRISPR delivery in the treatment of Duchene muscular dystrophy.
In this study, the authors reported corroborating data on the risk associated with AAV-CRISPR, a novel approach to evaluate these risks, and interesting results that pave the path for future research. The long-term and persistent expression of Cas9/gRNA are observed in the mouse model of DMD (mdx null mice). The correction of dmd gene resulted in expression of the full-length dystrophin protein and minor quantities of other smaller isoforms. It also showed improved muscle health including decreased creatine kinase activity, neutrophil infiltration, cytokines, and inflammation.
While CRISPR-based gene editing has shown promising results, the studies to unravel and characterize its associated risks are necessary to ensure safety and effectiveness in clinical studies. The CRISPR associated risks include:
a) Off-target effect
b) Genotoxicity
c)Immunogenicity and host defense
d) Promoter silencing and suppression of gene expression

First, the authors evaluated various routes of administration of AAV serotypes, viral distribution, expression of CRISPR (Cas9 and guide RNA), and correction of the gene with an expression of functional dmd genes. The systemic administration showed an increase in the expression of Cas9/ guide RNA in different tissues over time.
In contrast, the intramuscular injection showed a significant decrease in the expression of this transgene over time. The biodistribution studies showed the presence of the viral genome and Cas9/gRNA expression in skeletal muscles, cardiac muscles, liver, and other tissues. These non-selective tissue expression of the transgene is dependent on: i) tropism of the AAV8 and ii) the CMV promoter. The characterization of gene editing in unintended tissues and decreasing its occurrences are crucial for advancing CRISPR to the clinical phase.

Next, this study also examined the different gene editing events after administration of AAV8-CRISPR in the mice model. The unintended insertions and deletions at the target site, off-target indels, and AAV viral genome integrations were characterized. The targeted ddPCR or PCR/deep sequencing method is generally used for monitoring insertion/deletion or integrations.
This method is not suitable for large insertion or deletions that alter the primer sites. Therefore, the authors performed unbiased gene sequencing using Illumina’s Nextra-transposon based library preparation for sequencing and characterized the genome modification after administration of AVV8 CRISPR.
A small number of indels at the target site and off-target viral integrations were detected in host tissues. More importantly, approximately 7% of the indels were detected in the exonic sites of the genome. Mostly, the genetically engineered AAVs do not integrate into the host tissues. But CRISPR mediated double-strand DNA break (DSB) and induction of DSB repair increases the probability of viral genome integration. Although, these integrations are not seen on the oncogenic sites, or protein-coding regions, the genotoxicity characterization is imperative for safety.

Finally, Nelson et al. 2019 evaluated the incidence of immunogenicity but lacked the evidence to sufficiently show an impact on gene editing and correction. The study showed a higher incidence of anti-Cas9 antibodies and T-cell response (measured using ELISPOT). But the expression of Cas9/gRNA seemed unaffected up to six months to one year of administration.
When the AAV-CRISPR was administered intraperitoneally to the neonates, the immune response was not observed in these mice. This provides evidence that neonatal tolerization against AAV-CRISPR may help mitigate the immunogenicity related safety risk.