on January 20, 2023
Introduction to Anti Drug-Antibody Assay
The total anti-drug antibody(TAb) assays detect the antibodies that are specific to the therapeutic molecules. These assays do not distinguish specific isotypes and detect all classes of antibodies present in the samples. The different platforms have been used for the detection of total antibodies such as bridging antibody assays, indirect ELISA assays, SPR assays, Immuno-PCR assay and most recently mass spectrometric assay.
Although the detection system varies with different platforms, the detection still relies on the ADA and therapeutic molecules binding and interactions.
A tier-based approach is utilized for detection of ADA that includes
a) Screening Assay
b) Confirmation Assay
c) Titer Assay

Bioanalytical Platform and Detection System:
Indirect ELISA/ECL method:
The indirect ELISA method utilizes the capture of antibodies using the drug and detection using the reagent that recognizes all classes of antibodies. The detection reagent may include an equimolar mixture of enzyme-conjugated anti-human IgG, anti-human IgM & anti-human IgE for the ELISA method. The anti-human IgG, anti-human IgM and anti-human IgE bind to the respective isotypes providing total antibody concentration. The characterization of ADA has shown the presence of a higher amount of IgG and IgM and a very low amount of IgE.
Alternatively, the enzyme-conjugated mixture of Protein A, Protein G, and Protein L have also been used for the detection of total antibodies in the sample. The Protein A and Protein G binds to the Fc region of the antibodies and has a high affinity for IgG. The protein L binds to the kappa short-chain region of the antibodies enabling the binding to the most class of antibodies.

Bridging Assay method:
The bridging ELISA/ECL methods are most widely used for the detection of total antibodies in the samples. The bridging assay format utilizes the specific binding of the bivalent/ multivalent antibodies to the drug to detect for capture and detection. In this type of assay, the equimolar concentration of biotinylated drugs and detection component conjugated drugs.
This method has an advantage over the previous method where only bivalent binding proteins such as antibodies can bind to the drug. Any other monovalent endogenous interfering molecule may not result in positive antibody detection.
But the caveat with bridging assay is that the multivalent binding proteins do interfere and result in false-positive results. In these scenarios, the further characterization utilizing drug-specific and antibody-specific (Protein A/G) immuno-inhibition provide the confirmation of the antibodies. The principle of ELISA and ECL detection methods are discussed on the page later.

Surface Plasmon Resonance Method:
The surface plasmon resonance method has also been used to detect total antibodies and isotyping. The technology utilizes the principle where the interaction of antigen/antibodies increases the mass on the adsorbed surface of the gold plate SPR chip resulting in a change in the inflection angle of the light which is recorded as a response unit.
The method enables the detection of low-affinity antibodies which otherwise is not detected by ELISA or ECL methods. It also enables multiplexing including the isotype characterization and epitope mapping, automation and faster turn around. 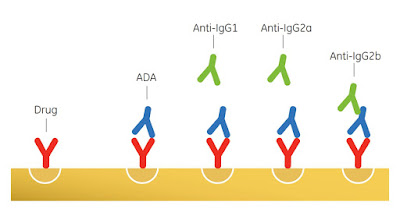 Immuno-PCR Method:
The Immuno-PCR have previously used for the detection of anti-drug antibodies and showed high specificity and sensitivity. The immunoPCR utilizes a similar capture system such as biotinylated proteins and the detection reagent is cross-linked with the DNA probe which undergoes amplification. The presence of antibodies results in the amplification of complementary DNA segments with probes and the signal can be detected quantitative PCR. 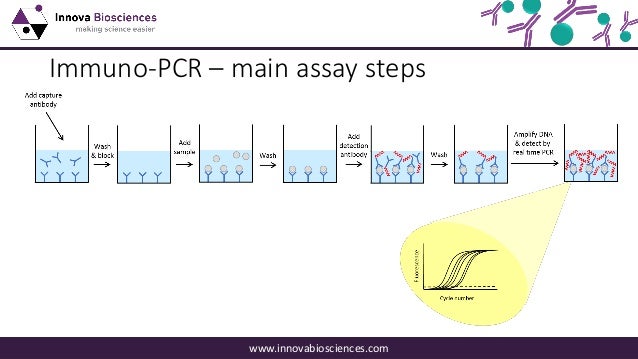