on September 17, 2019
Meadows et al. recently published papers (Mol Ther Methods Clin Dev, 2019) that investigated the threshold of antibody titer levels that would limit the transduction efficiency of systematic rAAV9 gene delivery.  The early clinical trials have revealed a potential impact of preexisting antibodies against adeno associated virus in the efficacy of transgene expressions. This study attempts to characterize the correlation of transgene expression (NAGLU)  with preexisting antibody titers against AAV9.  The nonclinical nonhuman primate studies were conducted to evaluate the transduction efficiency after systemic delivery of rAAV9 at varying level of preexisting antibodies and define efficacy threshold if any. The following are the excerpts and the result summary from the study:

Threshold for Pre-existing Antibody Levels Limiting Transduction Efficiency of Systemic rAAV9 Gene Delivery: Relevance for Translation
Abstract:
Widespread anti-AAV antibodies (Abs) in humans pose a critical challenge for the translation of AAV gene therapies, limiting patient eligibility. In this study, non-human primates (NHPs) with pre-existing αAAV Abs were used to investigate the impact of αAAV9 Ab levels on the transduction efficiency of rAAV9 via systemic delivery. No significant differences were observed in vector genome (vg) biodistribution in animals with ≤1:400 total serum αAAV9-IgG compared to αAAV9-Ab-negative animals, following an intravenous (i.v.) rAAV9-hNAGLUop (codon-optimized human α-N-acetylglucosaminidase coding sequence cDNA) injection. Serum αAAV9-IgG at >1:400 resulted in a >200-fold decrease in vg in the liver, but had no significant effect on vg levels in the brain and most of the peripheral tissues. Although tissue NAGLU activities declined significantly, they remained above endogenous levels. Notably, there were higher vg copies but lower NAGLU activity in the spleen in NHPs with >1:400 αAAV9 Abs than in those with ≤1:400 Abs. We demonstrate here the presence of a threshold of pre-existing αAAV9 Abs for diminishing the transduction of i.v.-delivered AAV vectors, supporting the expansion of patient eligibility for systemic rAAV treatments. Our data also indicate that high pre-existing αAAV9 Abs may promote phagocytosis and that phagocytized vectors are not processed for transgene expression, suggesting that effectively suppressing innate immunity may have positive impacts on transduction efficiency in individuals with high Ab titers. 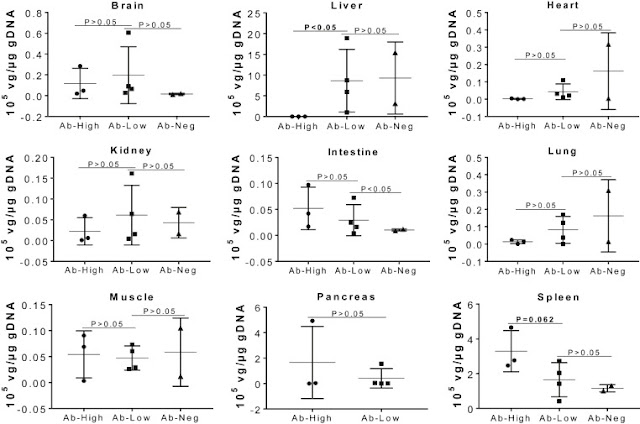